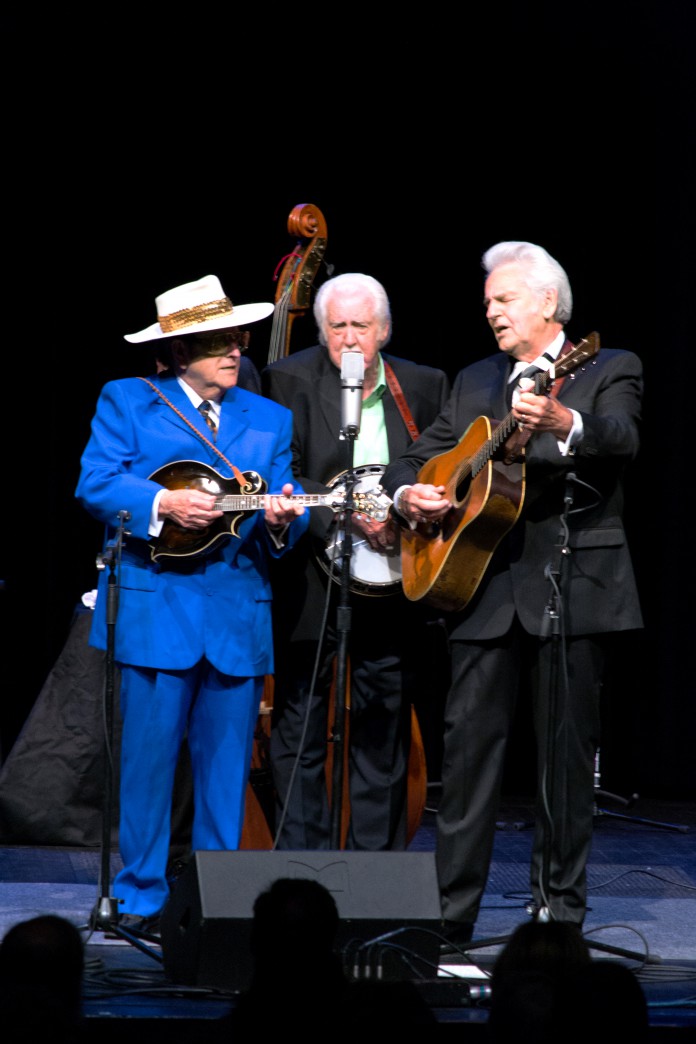 Bluegrass music is both the epitome and the roots of Americana. Amid the latest pop hits and R&B stars, bluegrass has remained timeless in America for centuries. Composed of four Bluegrass Hall of Famers and two Grand Ole Opry members, the Masters of Bluegrass graced the stage of Campbell Hall this past Thursday, Oct. 3. These musicians include J.D. Crowe, Bobby Hicks, Jerry McCoury, Bobby Osborne, and Del McCoury.

The Masters of Bluegrass opened up their set with a lively ode to the “hills of old Virginia” to much applause. I was curious to see who attends bluegrass performances, and to my surprise, the audience was not made up of mostly white-haired patrons as I had expected. The demographics of the audience included a noticeably younger crowd; perhaps these students mainly attended to receive credit for University of California, Santa Barbara’s Music 16 class, but they nonetheless seemed just as eager as their older peers to hear the music from the Masters.

When the men came out, one stuck out in particular. The mandolin player, Osborne, was decked out in an electric blue suit and a sparkly, wide-brimmed hat, in contrast to the other members’ black suits. The sounds Osborne created on his mandolin were also unique, as seen early on in the performance with old classics such as “Cheyenne” and “Tearfree Lady.” He would pluck the strings in a way that had the effect of a clopping horse, or at times, falling leaves.

In between songs the band would playfully banter and whisper, giving the effect I was right in the middle of their own personal jam session. Their on-stage communication was fun, as they recounted tales of their 50-plus years of experience performing at bluegrass festivals and writing songs. At other times, the band’s whispering and laughing was a little distracting while McCoury or Osborne would be introducing the next song. Sometimes the on-stage murmurs felt as though members had forgotten what song was supposed to come next and were having a group consultation.

All these distractions were soon forgotten when the Masters began to play their music. Every instrument was able to perfectly weave into the sounds of the other musical instruments, and the band members looked like they were having a great time just doing their thing. Even the stoic banjo player, Crowe, cracked a smile during the gospel song “Tallyho Crossroad.”

Every member of the band had a chance to sing a song that either he had either written or which showcased his particular instrument. While the genre of the performance was clearly bluegrass, there were many different styles and topics for everyone in the audience to enjoy, including songs of family, love, cheating lovers, wild parties, spirituality, and achieving personal aspirations. However, after the first half of the performance, it become more and more difficult to differentiate between the happier songs from the sadder ones, as almost all the songs played had an upbeat melody and rhythm.

As the band attempted to play their grand finale “Rocky Town,” they were met with protests from the audience. Audience members familiar with the work from these famous song writers began to call out requests, and one member in particular asked that the 10-time Grammy winner Hicks be permitted to sing another song. With some laughter and another mini-group consultation, the Masters of Bluegrass obliged, and Hicks wowed the crowd with “I’ll Love Nobody But You” and, another song request, “Take Me In Your Lifeboat.” It was clear that the band had not practiced those songs religiously, but one could only tell by sight. To my ears, the songs were perfectly executed, as the band quickly got on the same tune and timing. The only way I could tell the songs were not regularly practiced was because the eyes of the band were on the hands of the fiddler Hicks, as they were following his lead.

Overall, the performance by the Masters of Bluegrass was anything but boring, and the energy of the audience, the liveliness of the music, and the passion of the players could be felt the whole night.