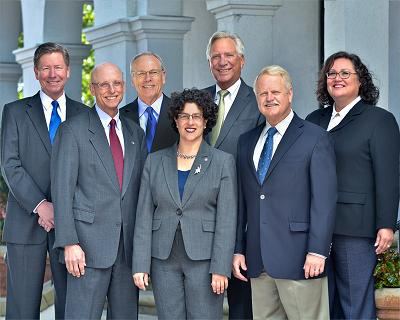 In an effort to promote the use of reusable shopping bags in order to benefit the environment, the Santa Barbara City Council passed an ordinance on Tuesday, Oct. 1, banning the distribution of plastic bags within city limits.

Although opposition from groups like the Save the Plastic Bag Coalition was strong, councilmembers voted 6-0 to pass the ordinance and have agreed to enact it within six months.

The first stores to be affected will be large grocery stores and pharmacies that consist of 10,000 square feet or more; after another six months, smaller food-selling businesses will also be forced to comply with the new regulations. Overall, around 85 stores will be affected by the new ordinance.

Third-year Tayler Reinman, a member of University of California, Santa Barbara’s Environmental Affairs Board, considered the council’s decision a success.

“Santa Barbara is pretty far along compared to other places, but there is still room for improvement,” Reinman said.

According to Reinman, EAB and other campus organizations already encourage students to use reusable bags when shopping, which is why she is so supportive of the new measure.

“It’s a big step in the right direction because it’s easy and accessible to everyone,” Reinman said.

CALPIRG, another campus organization that has helped ban the use of plastic bags in over 80 cities and counties in California, spent the past three years raising awareness about the environmental hazards of using plastic bags. Working together with groups like EAB and the Coastal Commission, the organization lead citizen outreach programs and handed out petitions to UCSB students and other Santa Barbara citizens.

CALPIRG delivered thousands of signed petitions to the council meeting on Tuesday, when the ordinance was voted on.

“It’s a big deal,” said Kat Lockwood, campus organizer for UCSB’s CALPIRG chapter. “You won’t be able to get plastic bags in any grocery stores, even on campus.”

After receiving more than 7,000 signed petitions, Lockwood is confident that UCSB students will be pleased with the council’s decision to enact a ban on plastic bags.

“Students are pretty excited about it, there was a ton of support on campus,” said Lockwood. “It’s exciting to see this victory actually come to fruition in real life.”

The main argument in support of the measure was the threat plastic bags pose to our oceans and marine life. Since plastic bags are not biodegradable and are frequently thrown away after use, they often end up in the ocean, potentially harming fish and birds who can get caught in the bags and die as a result. Many of these plastic bags end up joining the Great Pacific Garbage Patch, a trash heap consisting of millions of tons of plastic that is found off the coast of the Pacific.

According to the Community Environmental Council (CEC), Santa Barbara residents use 47 million plastic bags per year. Although plastic bags can be reused for things like lining trash bins, eliminating them altogether can significantly lower the amount of plastic bags used annually. At the meeting, the CEC also noted that supermarkets in other areas where plastic bags are banned have seen a 94 percent decrease in plastic bag use.

Even though plastic bags will no longer be distributed freely, they will still be available for purchase at 10 cents a bag, for customers who forget their reusable bags or are unaware of the ban.

“That’s definitely an incentive for me to bring my own bags,” third-year student Paige Rutten said. “I can’t really afford to spend 10 cents per bag every time I get groceries.”

Similar bans on plastic bags exist throughout California in cities including Los Angeles, San Jose, and Berkeley. Santa Barbara’s ordinance will go into effect in April 2014.