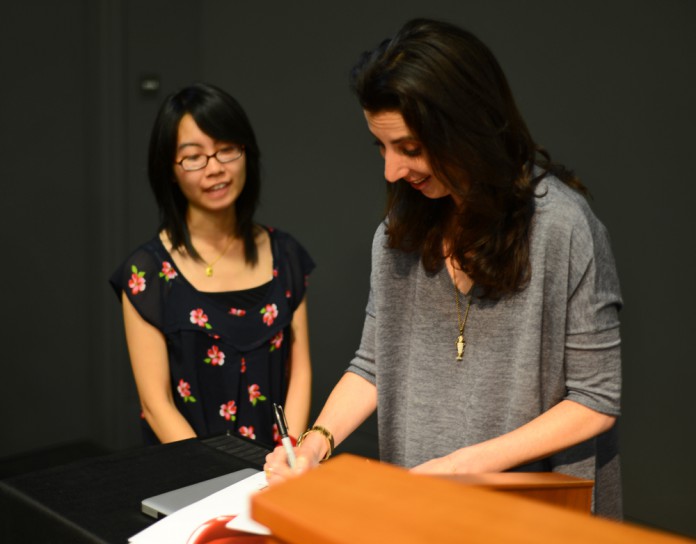 Part of the “Script to Screen” lecture series, Aline Brosh McKenna, screenwriter of “The Devil Wears Prada,” came to Pollock Theater on Oct. 17 for a Q&A session after the screening of her successful film. McKenna spoke about adapting the book into a film, casting Meryl Streep as Miranda, and her career before becoming a screenwriter.

“The Devil Wears Prada” depicts the hectic lifestyle of post-college graduate, Andy (Anne Hathaway) trying to balance her personal and work life after interning at a prestigious fashion magazine in New York City. The movie explores Andy’s transition from a naive, young professional into a person who will manipulate others to get ahead in her job.

“In any workplace, you adjust your world,” McKenna said during the Q&A session. “Andy can say at the beginning that she’s not obsessed with her job, but then she gets caught up in it.”

McKenna, whose past screenplays also include “27 Dresses” and “We Bought a Zoo,” drew inspiration from not only the book by Lauren Weisberger but also her own personal life when writing this screenplay. She didn’t have a mean boss; however, she worked for a lot of people and saw how people become preoccupied with their bosses.

Andy’s obsession with her boss, Miranda Priestly (Streep), a character drawn from American Vogue’s editor-in-chief Anna Wintour, quickly becomes apparent throughout the movie. Through subtleties within the screenplay and non-verbal communication, Streep is utilized by McKenna to manifest a character who is more concerned with her personal goals than the well-being and feelings of other people. What sets Miranda apart from Andy is that “Miranda knows she’s a ‘piece-mover,’ while Andy does not,” said McKenna.

McKenna noted that Streep was “incredibly fun to write for.” McKenna worked on the script not knowing who would play Miranda in the movie. She said she was glad to have Streep play Miranda, because there was so much Streep could add to the character non-verbally. Streep wanted to say less and do less, portraying her character as calmly as possible. McKenna proceeded to explain Streep’s strategy, as seen in the scene in which Miranda rates James Holt’s clothing collection. McKenna originally wrote a long scene in which Miranda would comment on each dress individually. Yet, Streep asked to limit the verbal communication within the scene in order to more effectively portray Miranda’s disappointment with James’ collection. McKenna agreed to this strategy, which in the end, resulted in Miranda’s infamous “pursing of the lips.”

While adapting the screenplay, McKenna attempted to strengthen the plot when it came to Andy’s work environment. The book was rock solid with details about Andy’s personal life but not within the Runway Magazine atmosphere. McKenna engaged in a conversation about the details present and not present in the book, explaining the adaptation of her screenplay to better fit Hollywood’s movie plot specifications.

In the beginning of the movie, Andy thought she was was too good for her job as an assistant to Miranda, but by the end of the movie, Andy believes she is very lucky to even be in Miranda’s presence. When asked if Andy’s assistant job was worth it, McKenna said, “I would take it.”

McKenna then spoke about the similarities between Andy and herself, explaining how she started off as a journalist in New York City before deciding to become a screenwriter. Her first few years as a screenwriter proved difficult, but she stuck it out, later moving to California. After working for seven years, she got her first big break with the romantic comedy movie “Three to Tango.” Although her screenwriting career started off roughly, McKenna persisted in the industry and developed her career into what it is today. Ultimately, McKenna offered advice to the college students in the audience, citing kindness and hard work as the keys to success.

“Script to Screen,” sponsored by the University of California, Santa Barbara’s Carsey-Wolf Center and the Film and Media Studies Department, is next featuring a screening of “Risky Business” and a Q&A with director Paul Brickman on Nov. 14.