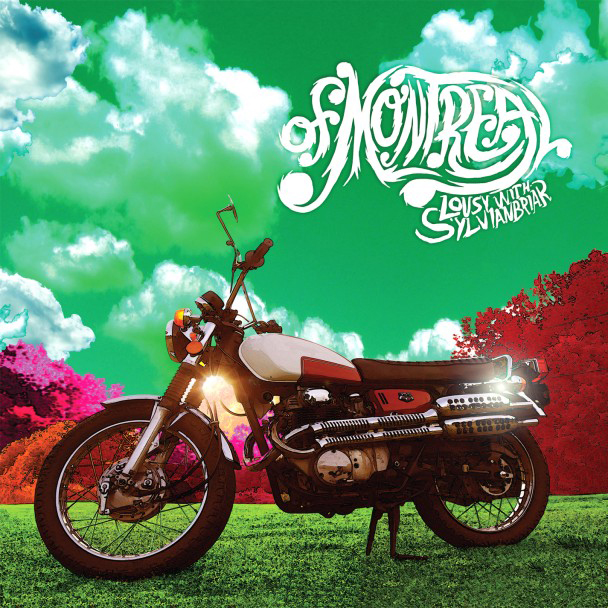 Previously, the indie rock band of Montreal has occupied a beloved place on the very fringes of its genre, oftentimes disobeying all of indie rock’s agreed-upon conventions, but it is this sentiment that separates of Montreal from every other band. With their latest 12th studio album, “Lousy with Sylvianbriar,”of Montreal essentially redefines their sound and rejects the work of their own past, separating this album from all their others in a spectacular and surprisingly neat fashion.

To say of Montreal and songwriter Kevin Barnes have gone back to their roots is inaccurate, as their roots are hard to even pinpoint. Of Montreal does, however, return to the roots of rock music with “Lousy with Sylvianbriar,” as it almost serves as an homage to all the disparate sounds that have come out of the ubiquitous and all-encompassing genre of rock. The devotion to and respect for the medium is evident with songs like “Belle Glade Missionaries,” which evokes a post-Newport Bob Dylan; “Colossus,” a 1970s John Lennon-esque song; and “She Ain’t Speaking Now,” which recalls some of 1990s rock mainstay Pavement’s best work. But this album is not a mere sound-alike of what has been done before; it is totally unique in its approach.

Musically, this of Montreal album is much more focused and tangible than their past works, and it features consistent and defined choruses, bridges, and riffs which serve to ground an album (and band) that could so easily float away. Kevin Barnes has stated that with this album, he “wanted the songs to be more lyric-driven, and for the instrumental arrangements to be understated and uncluttered.” With that in mind, he has created an exceptional modern album with a retro feel.

Although this album experiments with its genre and approach, it is definitely still an of Montreal album, for the lyrics are quintessential Kevin Barnes. Barnes somehow manages to write and operate in an ephemeral world full of confessional spoken word poetry (allusions nobody quite comprehends), such as his ravings of a tin foil hat wearing man on the sidewalk, but appreciating these lyrics has never been of much problem for the mercurial Barnes or his faithful listeners. While the lyrics are as long-winded and rambling as one would expect, these lyrics shine through more so than ever, as the words and music no longer fight for the attention of the listener’s ear.

This album may not feature the unearthly rambling cacophony of their past “Coquelicot Asleep in the Poppies” and does not exclusively utilize the 60s-inspired psychedelicism of “Adhils Aboreteum,” but “Lousy with Sylvianbriar” instead emphasizes a calmer, more subdued sound than anything the band has previously produced. For the fans of of Montreal, “Lousy with Sylvianbriar” represents a dramatic change in style, but one that can be easily appreciated for all the same reasons that one previously liked the band, and for those with no past experience with of Montreal, this album offers a great introduction into a truly polarizing and brilliant group of musicians.