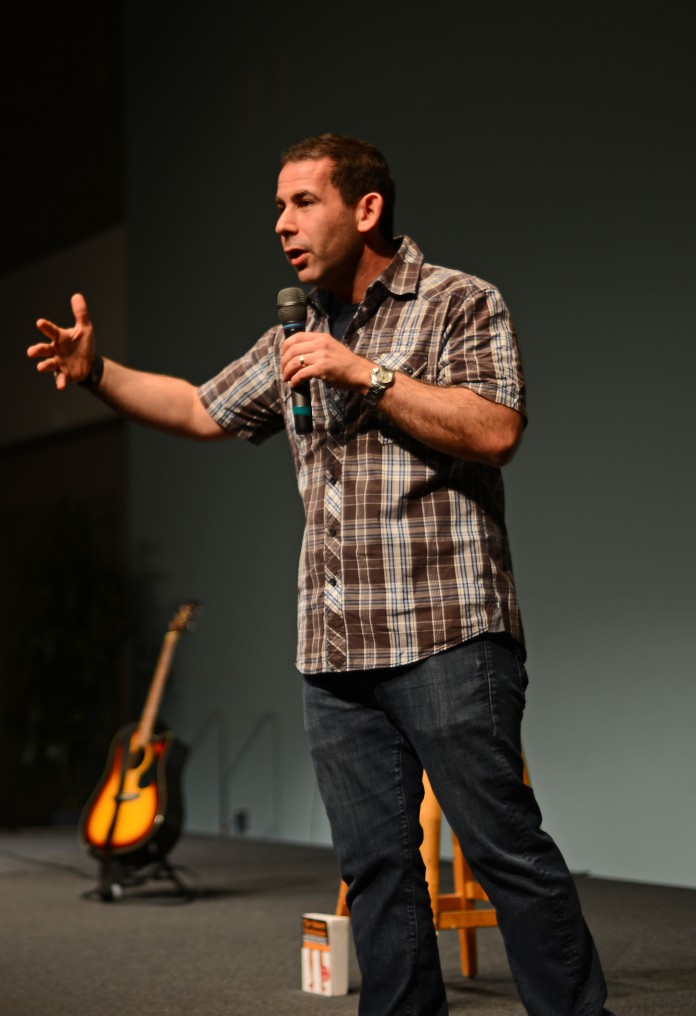 Gauchos got a chance to “get naked” with Harlan Cohen — New York Times bestselling author of six books, speaker, and advice columnist — at University of California, Santa Barbara’s Corwin Pavilion. This free event was hosted on Thursday, Oct. 10, by UCSB Associated Students Program Board and The Commission on Student Wellbeing.

While promoting his new book, “Getting Naked: Five Steps to Finding the Love of your Life (While Fully Clothed & Totally Sober),” Cohen addressed the confusing world of college relationships, hookups, and encounters that can baffle even the most experienced Isla Vistan.

As a trusted college life expert, Cohen shared his own personal stories and truths that he had learned over years of experience growing up as the “funny fat kid.” However, as a self-proclaimed 8 out of 10 on the scale of attractiveness, Cohen now intends to enlighten student bodies nationwide on the simple realities of romantic and sexual college encounters. With his smooth ability to use humor while still tackling some difficult, often taboo, and surprisingly common issues experienced by college students, Cohen provided honest and applicable advice for navigating college relationships.

Despite the large crowd that attended the lecture, Cohen was not shy. Walking up to both the single and dating students, Cohen had one-on-one conversations for the audience to hear, taking on some of their own personal problems and experiences. Additionally, throughout the talk, students had the ability to anonymously ask questions via text or e-mail, which Cohen would answer live on stage without reservation. With no bounds, subjects ranging from “how to get out of the friend zone” to “his personal take on the taboo threesome” were addressed in front of the crowd, not only for the benefit of the anonymous advice-seeker but also for the rest of the audience.

Even though his humorous delivery clearly appealed to the crowd, when the laughter and jokes were stripped away, the difficulties that he addressed were clearly applicable to the students of various ages, relationship statuses, and sexualities that were in attendance. Relationships can be challenging regardless of one’s stage in life, and for college students trying to balance school work, jobs, friends, and extracurricular actives, relationships or casual encounters can become even more daunting, adding more weight to one’s “things to figure out and do” list.

However, Cohen is here to help, and not only with traditional relationships. From questions about dating to the one night stand, Cohen has answers in his books — which are also offered online or in audio versions. You can become a “Naked Member” by joining an online community, which Cohen refers to as the “nicest community for college students” at www.NakedRoomate.com, or, if you want to ask Cohen for advice directly, he will answer your questions at www.HelpMeHaran.com.

Finding a relationship in college while sober, clothed, and during daylight hours may seem like a myth, but according to this established author and advice columnist, it does not need to be as hard as it is often made out to be. With a few simple truths, you could be on your way to a healthy, happy college relationship. Or, if you’re in pursuit of causal hookup(s), a more educated one. All you need to do is strip down and “get naked” with Harlan Cohen.