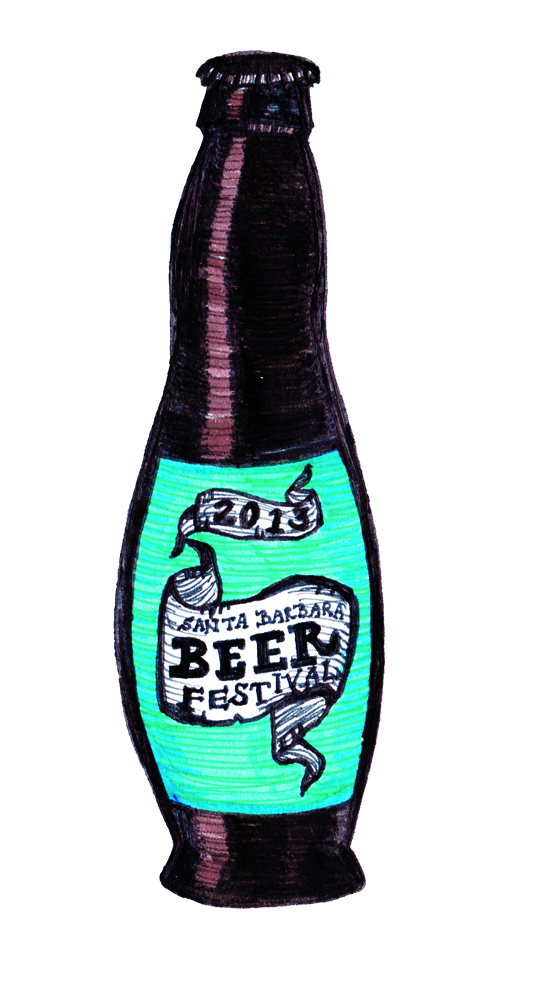 Patrons were literally and figuratively buzzing with excitement at the 6th annual Santa Barbara Beer Festival on Oct. 19, which showcased nearly 30 microbreweries from the West Coast. Elings Park, sprawling 230 acres, hosted the four-hour event and was complemented by sunny skies and slightly cool temperatures—the perfect setting for an afternoon spent sampling lore, soaking in live music, and welcoming the fall season with open arms and brimming glasses.

Put on by the Santa Barbara Rugby Association, the Beer Festival attracted approximately 2,000 attendees this year and was a sold out affair. The SBRA (a non-profit) and Elings Park, (a privately funded park), will receive 100 percent of the funds generated from the event.

“I think it does a lot to bring together the community,” Dough Lynch, the president of the Grunion Rugby Club within the Santa Barbara Rugby Association, said in an interview prior to the event. “The average attendee is probably under 30, and this is an opportunity to get together outside, enjoy beer, music, beer, food, beer and to help benefit two non-profits.”

Part of the Festival’s appeal was its large selection of brews and its representation beyond California. Although local names like Island Brewing Company and Figueroa Mountain Brewing Company made their appearances, to the delight of native aficionados, other purveyors, such as Deschutes Brewery and Alaskan Brewing Company, traveled from the northwest.

“This is a Central Coast beer festival; all of the local Santa Barbara brewers are here, but we are also getting some from San Francisco, Oregon, Los Angeles, and San Diego,” said Lynch.

The breweries’ levels of familiarity with the Festival varied as well. Casey Harris, a brewer for Stone Brewing Company and a 2011 University of California, Santa Barbara alumnus, said, “I think we’ve been here [at the Festival] every year. It’s good to come back and pour beers for everyone.”

In contrast, The Dudes’ Brewing Co.—a relatively young brewery out of Torrance, Calif.—described the Festival as a way for them to get their name out to the public in an interactive way.

“We’ve been out six months, so this is our first opportunity to participate in Santa Barbara,” co-owner Toby Humes said. “We just signed up with a distributor up in Santa Barbara a month ago, so we’re signing up for festivals around the area. We’re excited to have our beer available up in Santa Barbara and be part of Beer Fest.”
For new festival-goers, Humes added that a beer tasting tip is to “follow the three sip rule. Give something three sips to see if you like it or not. Sometimes the sip doesn’t hit the right part of your mouth.”

“This is my first beer festival; it was a birthday gift from my wife,” said Francisco Cordero, an attendee visiting from Los Angeles, as he sipped a sample of Shock Top’s Belgian White. After finishing it, he offered his glass to a representative from Alaskan Brewery, who filled it with a sample of their IPA. He gave it his approval a few moments later—“It’s good, similar to Lagunitas,” he commented, pointing toward the tent across the field.

The long lines of thirsty festival-goers across Elings Field reiterated the event’s appeal to both freshly minted craft beer enthusiasts and seasoned connoisseurs.

“Our brewing is aggressive and in-your-face. We like to push flavors that don’t fit style guidelines at competitions,” Harris of Stone Brewing Co. said. “But as you can see from the lines, the public’s still responding to them.”

“The best part is seeing the beer come out from the tap and tracking who it goes to, and seeing them take a sip and their eyebrows raise,” Jeff Parker, co-owner of The Dudes’ Brewing Co., remarked.

For those who desired even more variety, a select number of booths, including Angry Orchard Hard Cider, Oreana Winery, and Twisted Tea Hard Iced Tea, also served other forms of alcohol.

“I liked that it was really open; there were so many good breweries around and a lot of variety,” said Vicente Gonzalez, a fourth-year anthropology and religious studies major. “The margaritas [from vendor Cayman Jack] were really good!”

To satiate any appetites, the Rugby Association sold sausages with all the fixings, and a couple of booths also provided food samples.

“I worked here last year, and this seemed to be the most popular booth. It goes over really well—beer and cheese are a good combination!” said Karen Koy, an Elings Park host who manned the Cabot Cheese booth.

Contributing to the casual ambience of the event were local bands Sonic Chaos, Me & Dinosaur, Thunder Rose, and J-town, who provided live music ranging from reggae to rock.

“[It is] just a real fun day with great beer, people, music, and food,” Lynch summed up.

The end of the event was well timed, as many of the breweries ran out of beer by 4 p.m. By then, the low afternoon sun enhanced the mellow ambience and had settled over the park as attendees exited, empty souvenir glasses in hand that served as testaments to the day.