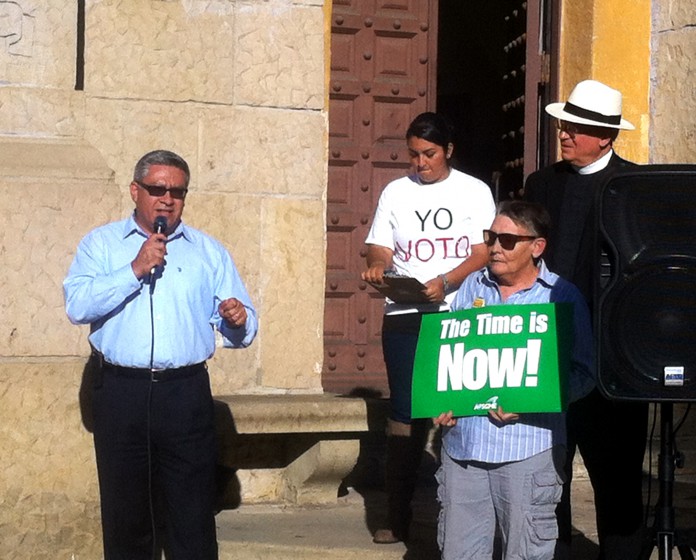 In light of recent calls by the Democratic Party for immigration reform, a Santa Barbara-based non-profit grassroots organization known as the Central Coast Alliance for a Sustainable Economy organized a rally outside of the Santa Barbara Courthouse Saturday, Oct. 5, at 4 p.m.

In preparing for the event, CAUSE worked in conjunction with other local activists and the support of the Latino communities of the Santa Barbara and Ventura county areas, taking part in one of a multitude of similar events occurring across the state and the nation in what has been termed the “National Day for Immigrant Dignity and Respect.”

“This is absolutely critical legislation that touches at our most basic fundamental values,” said Maricela Morales, the Deputy Executive Director for CAUSE. “Every day an average of 1,100 family members are deported because they’re undocumented. That’s 1,100 families that are split apart.”

Among a number of other progressive causes and social justice issues, CAUSE also works as an advocacy group for unrepresented and marginalized communities such as those for undocumented immigrants.

“Numerous research reports have shown that our undocumented immigrant community is absolutely vital to our economy,” Morales said. “There are an estimated 100,000 undocumented people in the two county area of Santa Barbara and Ventura county. Imagine obliterating 100,000 people. What would that do to our local economies?”

On Oct. 2, Democrats in the House of Representatives proposed HR 15, a bill intended to reform national immigration laws and to facilitate the legalization of undocumented immigrants. Included in the agenda for those present at the rally was to show support for the bill and to express concern that the recent government shutdown would inhibit the bill from being passed at a crucial time for the Latino community and at a necessary juncture in the history of immigration reform.

“It is so important that we advocate for immigration reform today, because with this distraction going on the House of Representatives could easily forget to move forward with this very important piece of legislation for our community,” said First District Supervisor County Supervisor Salud Carbajal, a keynote speaker at the event. “The Latino community through its labor has contributed greatly towards the prosperity of this country and we need to not let people forget that we are not a second priority, we are a first priority for the Congress. Let’s keep the advocacy going forward.”

Abigail Salizar, a second-year feminist studies and Chicano studies double major at University of California, Santa Barbara, is a member of IDEAS, a student-based advocacy and support group for undocumented students at UCSB, and was also invited to the rally as a keynote speaker.

“It offers a very long time, a minimum of 13 years, into citizenship…we’re settling for something that is not truly comprehensive, and that is not for our community as a whole,” said Salizar. “Very few people are going to qualify. Our community deserves a fast track to citizenship because we fought for it. We work, we pay taxes, we do everything that a normal citizen does. I think that settling for this immigration reform is not cutting it.”

Janet Napolitano, the former Secretary of Homeland Security, was recently appointed as the President of the UC system. Concern has been expressed that her instatement as president of the University of California is not only disrespectful but even potentially threatening to Latino students and UC students of undocumented status, given the fact that due to her previous occupation she has been at least indirectly responsible for the deportation of undocumented immigrants and their families.

“The position of IDEAS [in terms of the appointment of Napolitano] is that we are in no confidence with her,” Salizar said. “Undocumented student groups all over California have come together and formulated a set of demands, and until those demands are not met we will still continue to have no confidence stances against her.”