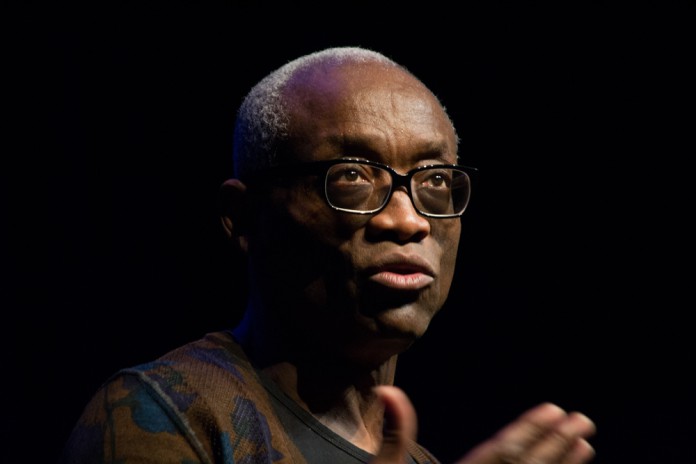 When Bill T. Jones introduced himself to an eager audience, primarily composed of dance students and professors at University of California, Santa Barbara’s Hatlen Theater, by singing a song his mother used to sing, I knew everyone was in for a unique, emotional experience with the MacArthur “Genius” Award winner — a fact that was drilled into my memory by anyone who had anything to say about his work. Presented by UCSB’s Arts & Lectures, Bill T. Jones participated in a lecture on Monday, Oct. 14, at Hatlen Theater before the Arnie Zane Dance Company performed his choreographed dance at the Granda Theater on Wednesday, Oct. 16.

During the lecture, Jones presented himself as less of a lofty genius and as more of a kind, thoughtful, and relatable storyteller. He reflected on his time in San Francisco, specifically a moment he had in a restaurant in the Tenderloin where he looked out of a window into a “fish bowl” of people.

“They seemed to be moving in another time zone,” Jones said, reflecting on the moment. “I can’t quite understand what that meant.” He explained the city was historically regarded as a  gentrification-resistant neighborhood and expressed his desire to close the gap with his creative work. In addition, he shared stories about everyday experience that moved him, from romantic love to seeing a small child cry out for the attention of her father.

The first piece of Wednesday night at the Granada Theatre, “Spent Days Out Yonder,” introduced the show in a calm and organized manner. The dance, set to the music of Mozart, was far from ordinary; however, it was the most classic performance of the night. I could only feel a tiny hint of unease brought on by the company’s eerie modifications of the Mozart, especially toward the end when the musicians began to play foreboding notes rather than coherent, pleasing music. This was only the beginning of a tense and shocking performance.

After what seemed like an intermission—but was only a brief pause—the company continued with the more provocative second piece, “Continuous Replay.” Much of its appeal was the complete nudity of the dancers. Initially, this added a comic element to the show. One naked dancer, a man, wildly danced his way across the stage to a sudden burst of sound. He came out again, slowly the second time, and turned his head toward the audience, making many people laugh. After he did this several times, people stopped laughing, and more nude dancers followed him. This motion, calm and in unison at first, steadily grew more active and violent.

The company included some unusual sound bites in the piece, the most noteworthy of which being the New York accented voice of Randall, the man who narrated the YouTube popular video “Crazy Nastyass Honey Badger” in 2011, and Neil Armstrong’s voice saying, “That’s one small step for man,” with the latter part of Armstrong’s famous statement being cut off. With the exception of the original nude man, a dancer named Erick Montes Chavero, the dancers gradually left the stage and returned with clothing. At the end of the piece, Erick was at the left of the stage dancing alone and naked with a group of clothed dancers to the right, who were gesturing toward him and yelling, “That’s all!”

“D-Man in the Waters,” a whimsical piece dedicated to the late Demian Acquavella, marked an other-worldly end to the night. The final piece contained elements of its predecessors, and like the first, it felt controlled yet fluid, like watching a Monet painting in action. It also contained elements of the violence and frantic struggle present in the second piece, “Continuous Replay.” The dancers cooperatively used each other’s bodies to leap across the stage. The fluid movements gave the impression of people swimming in water, even though the dancers only had air to swim in and a hard stage to swim on.

Like many artists, Jones was not inclined to talk about any explicit purpose or meaning in the dance, in spite of a couple audience members prying for answers about what might have been the most incomprehensible and provocative performance they had seen on a stage. Throughout the performance, I thought of what he said about the fishbowl, seeing people move “in another time zone.” I felt as if I had traveled through time after the performance on Wednesday, from the beginning of the human race in “Spent Days Out Yonder,” through war and struggle in “Continuous Replay,” and on to the unpredictable future leaping from the backs of the dancers into the air in “D-Man in the Waters.”