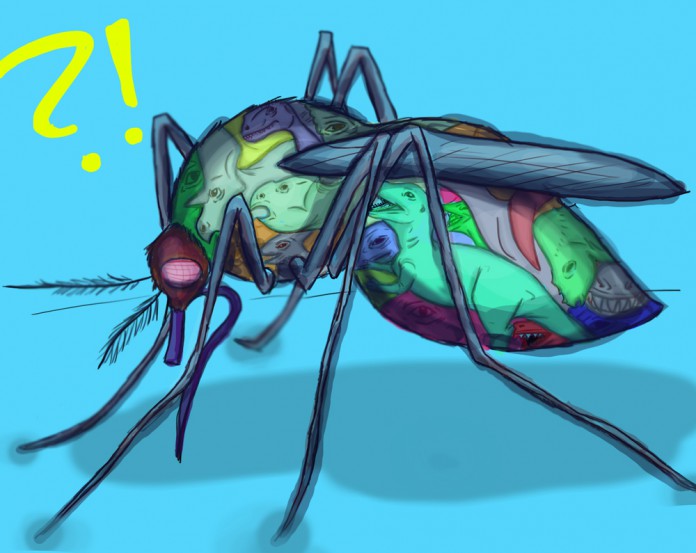 The image of a blood-filled mosquito suspended in amber was the science-fiction stuff of Jurassic Park – until now. A groundbreaking discovery has been made by scientists, involving a fossilized mosquito trapped in a piece of shale found in Northwest Montana.

Curiously, the insect was preserved in shale, the accumulation of fine sediments on the bottom of a body of water; usually, fossilized insects are preserved in amber, sticky tree resin that hardens when dried. According to Dale Greenwalt, a retired biochemist who works for the Smithsonian Institute, this means that “the insect had to take a blood meal, be blown to the water’s surface and sink…all without disruption of its fragile distended blood-filled abdomen.”

Greenwalt was the scientist who analyzed the fossil’s components by using chemical elements and a mass spectrometer, which identifies elements by their weights. This particular method is an excellent analytical technique since it allows fossils to remain undamaged and whole; scientists bombard fossils with molecules of heavy elements and then analyze the vaporized chemicals with a mass spectrometer. By using this method, Greenwalt successfully determined the presence of porphyrins, a naturally occurring organic compound in hemoglobin, which is the part of red blood cells that carries oxygen throughout the body. This indicates a “definite case” for traces of blood being present in the insect, said Greenwalt.

He compares the mosquito’s abdomen to “a balloon ready to burst.” The fact that a blood-filled mosquito could be preserved so well, and in shale at that, is truly amazing. Greenwalt added, “The chances that it wouldn’t have disintegrated prior to fossilization were infinitesimally small.” One possible explanation for this seemingly miraculous discovery is an algae preservation process, where an insect is trapped in a film of floating algae before sinking to the bottom of a lake.

Additionally, the specimen is highly detailed and scientists have been able to discern that it is of a wholly undiscovered species. The species has been named Culiseta lemniscata.

Does that mean Jurassic Park will welcome us anytime soon? Unfortunately for sci-fi fanatics everywhere, the answer is still no. Even though the discovery of porphyrins in this mosquito indicates that complex organic molecules can be preserved for much longer than scientists expected, mosquitos were still about 20 million years too late to ever suck blood from a Tyrannosaurus Rex.

Additionally, DNA cannot survive for very long, relatively speaking. Australian scientists have determined that it has a half-life of 521 years by studying the bones of extinct moa birds. In 521 years, half of the bonds linking the DNA together would decay, and in another 521 years, half of the remaining bonds would decay, and so on. Altogether, scientists predict that in only 5.3 million years, the DNA of any species would be rendered unreadable. Unfortunately for scientists, dinosaurs roamed the earth 65 million years ago, and so any preserved dinosaur DNA should be entirely gone by now.

“This confirms the widely held suspicion that claims of DNA from dinosaurs and ancient insects trapped in amber are incorrect,” said a scientist from the University of Sydney, Australia.

However, recreating extinct animals is not entirely impossible. Scientists in Russia and South Korea are trying to bring back a live woolly mammoth by inserting DNA stored in the nucleus of a preserved mammoth cell into a modern-day Asian Elephant egg. Mammoths went extinct a mere 3,000 to 10,000 years ago, and so there remains a chance of DNA retrieval. Technology is developing rapidly, and therefore nobody can say with complete certainty what this latest discovery may mean for the future of extinct animals.