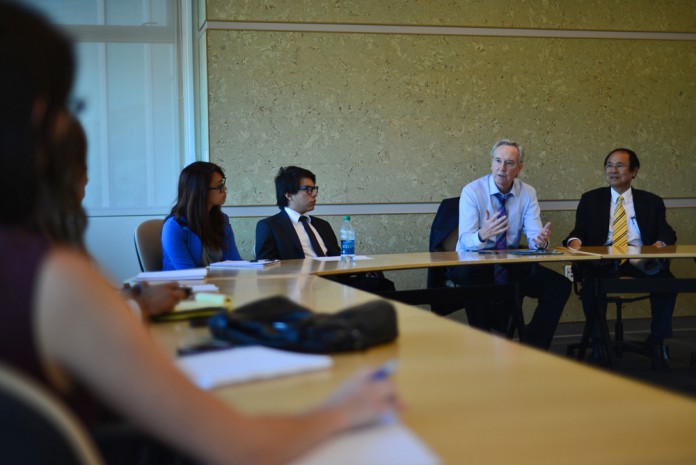 University of California Regent George Kieffer met with the Associated Students Senate and other students on Thursday, Oct. 17, to discuss issues such as UC President Janet Napolitano, tuition hikes, and the worth of a UC education.

To start off, Senate members mentioned that many students don’t know what the Board of Regents is, pointing out a lack of awareness. Students suggested that meetings at UC Los Angeles would be more accessible for undergraduates to attend.

“A lot of campuses aren’t equipped for meetings,” Kieffer said, and added that the board is trying to minimize travel costs. However, he did agree that they should try to make meetings as open to students as possible, and would be willing to hold a meeting at UC Santa Barbara.

The discussion shifted to the increase of Internet-based courses. These courses have made transferring credits among UC schools easier, but many students still feel uncomfortable about the shift toward web-based resources in the classroom.

“I chose to come to UCSB to take UCSB courses taught by UCSB professors,” AS President Jonathan Abboud said, “not a class taught by a Davis professor.”

Kieffer lauded the accessibility of web-based courses, but at the same time, reaffirmed that a university degree certainly has value that employers look for.

“I can’t see [online courses] replacing your education here at all,” Kieffer concluded.

The next topic was Napolitano, the new UC president whose appointment was a controversial choice that has received heavy criticism. A Senate member started off by referencing Napolitano’s previous job as Secretary of Homeland Security under the Obama administration and her lack of experience in education.

“We were casting a wide net to find the best person for the job at this moment,” Kieffer replied. “While she hasn’t been in [an educating] role before, I feel that she has shown the ability to adapt.”

Kieffer talked about financial issues, referencing how the UC budget has been cut 30 percent within the last few years.

“There’s a hole in the pension system…we are underfunded,” Kieffer said, and talked about current negotiations with unions.

He continued onto the topic of funding in general, and how the UC system has centralized several administrative and mechanical systems.

“We’ve already saved half a billion dollars because many university administrative systems have been centralized,” Kieffer said.

After a 15-minute recess, a group of around 20 students entered the room with messages from students.

They demanded leadership that they could trust, and a meeting with Kieffer that is open to all students, accessible, and announced in advance.

Their lists of demands followed, including a meeting at UCSB in the foreseeable future, fair wages, and tuition rollbacks in accordance with the California Master Plan for Higher Education.

“I think it’s totally natural to have that response,” Kieffer said mildly. However, he stands firm with his belief in Napolitano.

“Her first meetings are with students, which sends a very important message,” he said. “I think she’s going to be criticized, but I think she expects that.”

The talk turned to Napolitano’s military background, and student concerns over linking the UC system’s laboratory research with military research. Kieffer defended this association, and referenced the developments made in agriculture at UC Davis, in conjunction with local farmers and private companies. He also talked of promising leads for cancer cures made possible in part by funding from private corporations.

“The university becomes a bridge between the military and research,” Kieffer said. “It’s in the public’s interest.”

The students passed out fliers with important information regarding tuition hikes, explaining that tuition has risen up to 300 percent higher since 2002. Additionally, the number of UC employees receiving $400,000 per year has grown by 475 percent, and their cumulative compensation has grown by 507 percent.

Kieffer defended the financial situation by referencing the public schools in Michigan or Virginia, where 30 years ago, they deviated from the UC’s “low cost or no cost” philosophy.

“Chancellor paychecks are still of bottom third of top 60 universities,” Kieffer said. “You’ll graduate with an education, and with a brand…a UC education.”

The students demanded to know where the funds to education went, and if it was a result of mismanagement.