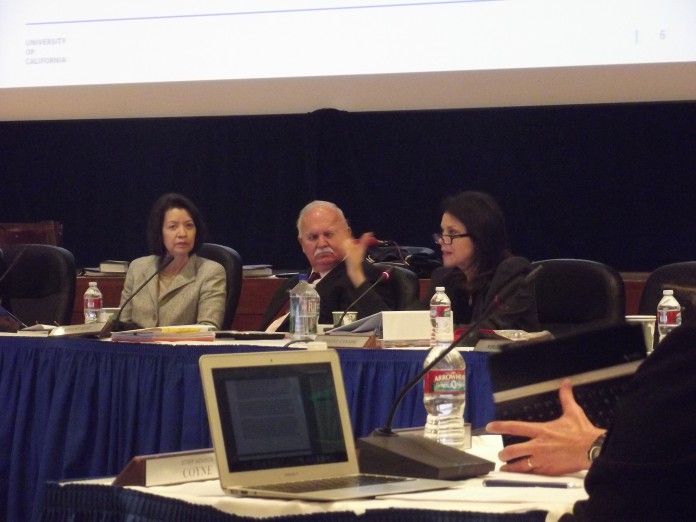 The Department of Energy Laboratories (DEL) updated the University of California Board of Regents on their research concerning climate change and forest mortality in California and the across the world during the July 18 UC Regents meeting at UC San Francisco.

The report focused on the event in which, during a drought, leaves close the holes by which they simultaneously lose water and absorb carbon dioxide. As such, forests not only begin to die from a lack of water, but also significantly reduce carbon dioxide absorption and the release of oxygen.

According to the DEL, Southwestern USA forests will be greatly reduced by 2050 and will suffer regularly from drought stress at levels exceeding previous mega-droughts.

“You said it would be sobering,” said Regent Norman Pattiz at the conclusion of the presentation. “It’s sobering.”

Pattiz said that society needs to cease discussion on whether or not climate change was a result of human activities and instead focus on addressing the issue.

The Regents and the DEL discussed options on how to proceed forward in attempts to be more environmentally conscious as well as the lesser known and studied effects of climate change, including an influx of non-native species, longer wildfire seasons, and wine production.

“I was reading a report on the effects of the food and wineries in California where they simply can’t produce wine,” said Regent Hadi Makarechian.

According to the DEL, the California coast is one area of uncertainty.

“We really don’t understand what’s going to happen to the marine layer,” said the DEL speaker. “If the sea water gets cooler, potentially it will get cooler along the coast and coastal California could cool while the rest of the planet gets warmer.”

Though no definitive action was decided upon to address the issue of climate change, a majority of the Regents expressed strong concern over the issue, and Pattiz described a lot of their other discussion items as “petty” when compared to the climate change discussion.

“How can we do more?” asked Regent Bonnie Reiss. “Because the need is there.”