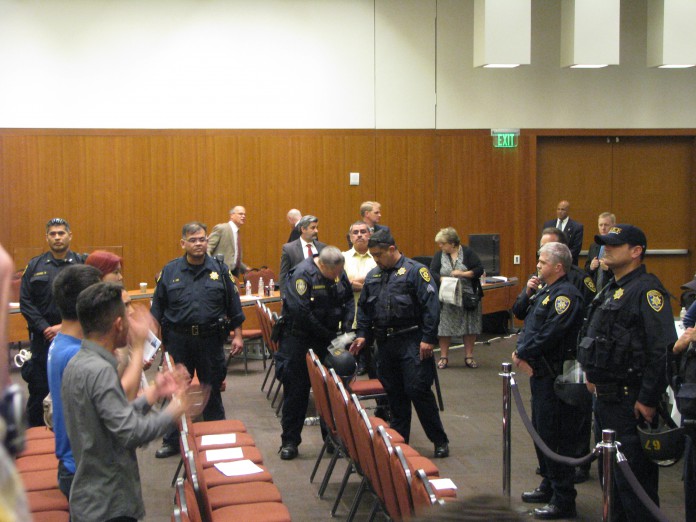 Four protesters were handcuffed and removed from the conference center as protests broke out at the University of California Board of Regents meeting on Thursday, July 18. Protesters chanted inside the conference center in opposition to U.S. Secretary of Homeland Security Janet Napolitano’s successful nomination as the next UC President.

Speaking initially at public comment, protesters expressed their concerns with her nomination. Several stated that they were “scared” on account of her work with the controversial Secure Communities policy. The program is designed to identify and deport serious criminal offenders; however, protesters claim that it has led to 1.5 million individuals, many of whom have not necessarily committed any serious offenses, being separated from their families.

UC Santa Barbara Associated Students President Jonathan Abboud, after admitting his certainty that Napolitano would be elected, expressed his own concern with the selection.

“I just hope that the Board exercises its oversight powers,” said Abboud. “I hope you’ll keep her in check.”

Norma Orozco, a recent UCSB alum, spoke out against Napolitano and the process in selecting her.

“This was not a decision that was made for the best of students,” said Orozco. “This is not what is going to help our classroom…This is not creating a safe environment.”

Following the announcement and approval by the Regents of Napolitano’s compensation package, which included a base salary of $570,000, protesters chanted “undocumented is not a crime.”

Two protesters broke through the divider separating the Regents and the public. Police threatened to arrest protesters after they refused to leave and gave them four minutes to disperse.

At the one minute warning, the majority of the protesters willingly left the conference center. The four remaining protesters locked arms and continued to chant. At the conclusion of the time limit, police separated and handcuffed all four protesters. The protesters surrendered without incident and were removed from the center.

The meeting reconvened shortly afterward, and the Regents expressed their opinions on both the protests and on Napolitano.

“We came to a unanimous decision,” said Regent Sherry Lansing. “She brings fresh eyes to our already wonderful UC.”

“I know that their fear is real,” said Flores. “I have felt that fear my whole life…I am documented and I am afraid.”

Citing both the concerns expressed by students and her own personal feelings, Flores voted against Napolitano’s appointment.

California Lt. Gov. Gavin Newsom said he cannot begin to understand what it’s like to live under that fear, but he believes that Napolitano will prove herself more than capable, particularly in regard to the Secure Communities policy.

“She understands the application of this law better than anyone,” said Newsom. “I think she will demonstrate that understanding and experience in a very positive light. I think you’ll hear that today, but I know you’ll see it in the upcoming months.”

After her approval, Napolitano said she was “humbled” by the Regents’ support and spoke briefly about what she hopes to achieve and how she intends to move forward.

“The University of California is the backbone of this state and a beacon for this nation and the world,” said Napolitano. “As California goes, so goes the nation.”

Napolitano also said she would approach the presidency with an open mind and open ears.

“When the students raise issues,” said Napolitano, “I will listen and I will learn…I need to know where you think we need to be going, where we are excelling, and where we need to improve.”