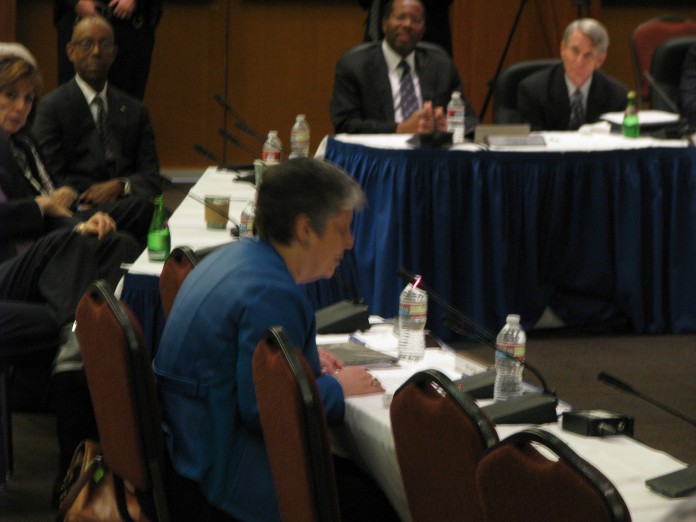 The financial future of the University of California system occupied a large portion of the second day of the UC Board of Regents meeting. The Committee on Finance presented their update on the 2013-14 budget as well as their predictions for what the 2014-15 budget will look like.

Though the 2013-14 budget assumes a 5.8 percent increases over the previous year’s funding resulting in a budget of $138.3 billion in State General Funds and Special Funds, the Committee on Finance, the UC Regents, and California Gov. Jerry Brown plan on enacting changes to the functions of the UC system to help reduce costs and improve efficiency.

Of theses changes, debt restructuring is expected to generate $80 million in annual savings. The debt restructuring provision, according to the Committee on Finance’s report, “fundamentally alters the State approval process for UC’s capital facility projects,” which would increase the UC’s efficiency concerning critical facility needs.

Online education received attention at the July 17 meeting with the budget planning to offer an additional 150 online courses over the next three years. Prior to the meeting, Gov. Brown’s vetoed items which allocated for $10 million of the UC’s base budget to be used to develop online courses. However, as Brown vetoed only the language association of the items, the University plans to continue with the $10 million funding.

UC Student Regent Cinthia Flores asked the Board if they knew how they would make sure to address students wants and needs and to incorporate student input in to the process. Flores also said she worried about the discussion focusing on “how online education is going to be provided versus the course work of online education.”

UC President Mark Yudof explained that online courses were not expected to be used for upper division courses.
“Basically the strategy is to take courses that are overcrowded, so courses that are general education requirements, pre-requisites,” said Yudof. “It’s highly de-centralized. It’s campus by campus.”

The report includes plans to develop, and implement a new Middle Class Scholarship program that would use $750,000 to provide grants for students whose family earns less than $150,000 a year and restructure UC debt, saving an estimated $80 milllion.

The changes also include adding new ways of evaluating UCs and CSUs entitled the “Cost of Education” and “Performance Outcome Measures,” as outlined in the report.

The “Cost of Education” requires the UC and CSU campuses to report on the cost of undergraduate, graduate academic, and graduate professional degree education as well as research activities. Initially, a systemwide report would be due within two fiscal years and then only on a campus-by-campus basis two years later.

Where the “Cost of Education” examines the financial effects of attending a UC and CSU, the “Performance Outcome Measures” would require the UC and CSU campuses to report on various items that give an impression of student academic experiences including the number and proportion of transfers, the number and proportion of low-income students, four-year graduation rates, degree completions, and the spending for and units per degree.

“We’ve done very well in increasing the number of transfer students that we’ve been able to handle. In fact, I applaud you for that,” said Ruiz. “I’m concerned that it may be an area that really mushrooms. I don’t know how we would handle that.”

Yudof disagreed with Ruiz’s concerns, instead calling the increase in transfer students “wonderful,” but also saying he was surprised at the lack of diversity amongst transfers.

“I had always assumed that our transfer pool would be more diverse than our general applicant pool,” said Yudof. “That turns out not to be so. African Americans, Latinos, and so forth are not as well represented so far in our transfer applicant pools as in the first-time college population.”

Despite these concerns, the budget passed and further discussions and ammendments are expected in the upcoming months.