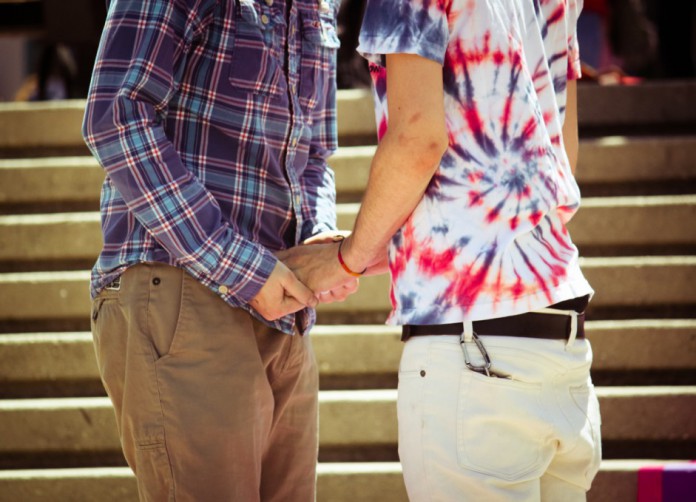 Confused at the misty late-April haze, University of California, Santa Barbara’s students were guaranteed to notice the splash of color that countless pride flags brought to the rather gray landscape last week. UCSB’s Pride 2013 took place from April 29 to May 4 and provided a platform for the UCSB community to express their support for what is both a celebratory and political movement.

Behind the vibrant colors and effervescent committee that forms the face of UCSB Pride, there lies a determination to pursue and educate the community on very significant issues of equality. UCSB Pride has been around for decades, effectively upholding the beliefs in fundamental human rights that many students share; the quintessence of the week resided in the event that took place last Friday afternoon: Queer Weddings.

The event presented an opportunity for members and allies of the Lesbian, Gay, Bisexual, Transgender community to show their support by getting married in Storke Plaza. Rings, vows, flowers, toasts, a cake, an aisle, and the occasional kiss all formed the markings of a beautiful traditional wedding, only there was nothing conventional about it.

Queer Weddings developed in response to the 2008 passage of Proposition 8. The proposition regarded marriage as a union between a man and a woman only, thus effectively outlawing queer marriages in the state of California. With a political jump-start, the event has grown into a showcase of the respect and support for all LGBT couples and allies within the community.

“This is a political event. It is time. It is time for us to be fully integrated into society,” said Madrigal in her address.

Similarly, Young, UCSB’s most visible administrative ally for LGBT students, stated boldly, “This is a political statement. This symbolizes the struggle for full and equal rights of all citizens of this nation.” Young stated that the event was a public declaration that marriage is a “fundamental and basic right regardless of race, socio-economic status, of gender, and of who we love.”

Both speakers emphasized the importance of having a public gathering to effectively demonstrate the weight of the issue while simultaneously conveying the confidence and courage of each member and ally of the LGBT community.

Sophia Armen, UCSB’s Associate Students president, commented, “Pride is a form of celebration but also a form of resistance.”

Some felt that despite supporting same-sex marriage, they didn’t feel the need for the “spectacle” that Queer Weddings created. Lauren Tyner, a fourth-year straight student who participated in the marriages, said in response to accusations of spectacle, “It’s a simple issue. This is about human rights. There should be no qualms about how public the event is.”

“This event is a symbol of efforts for equality,” concurred Tyner’s “wife,” alumnus Shannon Woodward. “This is the most public way we can make it be known.”

Stating that it is always the “highlight” of her year, Armen explained that she felt the event was important because it is about “celebrating identity and deconstructing norms.”

In a very touching address, Young stated, “You don’t pick love, love picks you.” He dared to ask the question, “How can something so natural, beautiful, and fundamentally human, be kept from some people in society?”

UCSB Pride’s mission is to celebrate and educate our community on the very current LGBT issues of our time. Queer Weddings was a reminder of the unfortunate inequality that still pervades part of the nation. As Young stated in the conclusion of his address, “Human rights are fundamental, not situational.”