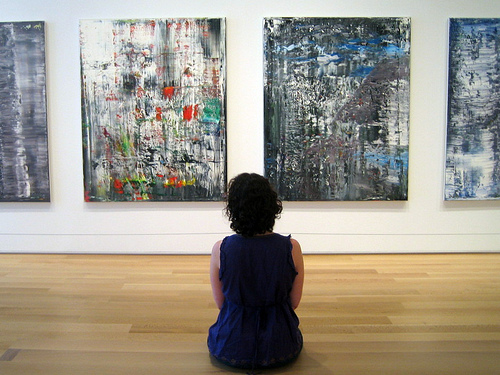 At the ripe age of 81, Gerhard Richter is one of today’s oldest living painters, with work spanning almost five decades. After growing up in East Germany, he achieved worldwide fame over the years, and a documentary aptly titled “Gerhard Richter Painting” is a testament to his renown. The documentary was screened at the University of California, Santa Barbara’s Pollock Theater on May 5 as part of the ART | ARCHITECTURE ON FILM film series put on by UCSB’s Arts & Lectures, and offers a glimpse into the inner workings of Richter’s studio and his innovative painting techniques.

The documentary reveals how Richter has experimented with numerous styles and artistic techniques, and focuses on the creation of a series of large abstract paintings along with the thought process. Richter believes that a painting is a living entity, and states in the film that he often ends up with something unexpected. He explains this phenomenon by saying that paintings simply “do what they want.”

After observing an enormous white canvas for a while, Richter dives head-first into the artistic process. He paints using a combination of large brushes and “squeegees” made out of Plexiglas. The “squeegees” are used to smear paint on the canvases and allow him to create a “blur” which is uniquely his. For Richter, the initial stages of a painting are the easiest and the most free. However, each successive step forward becomes more difficult. As a painting nears completion he states that it becomes increasingly harder to know what to do next, and explains that once he has begun a painting “there is a condition he must react to by either changing or destroying it,” and a painting is completed when there is simply nothing left to do. However, the artistic process does not end in the studio.

The film reveals that exhibiting a collection of works is as challenging as creating a work of art. There are several scenes in the film that stress the importance of lighting in an exhibit and how it can influence a work of art. For Richter, good lighting must be cold and neutral. In addition, the works of art must be able to exist simultaneously as a whole and as separate entities. Essentially, each painting must be able to perform on its own while remaining part of the collective whole. The artist discloses that even when a painting is finished, it is capable of changing and reacting to its environment.

Richter also addresses the role of an artist within society. He explains that painting is a “secretive” business and that artists are often individuals who have difficulties expressing themselves in social situations; thus, art is a naturally suitable form of expression for them. However, he stresses the irony that once a work of art is complete it becomes public and open to critical review, causing the artist to be simultaneously hidden and exposed. In relation to this, Richter expresses his discomfort while making the film, stating that it is nearly impossible to paint while being observed. For him, the camera is an all-seeing eye that relentlessly watches his every move. Even when painting under normal conditions, he dreads the intrusion of an unexpected visitor. That being said, audience members watching the film are essentially among the privileged.

“Gerhard Richter Painting” provides the viewer with incredible detail about Richter’s painting techniques and his mental approach to creating a work of art. In addition to the extraordinary works that the film exhibits, Richter’s vulnerability and willingness to expose himself during the production of this well-rendered film is remarkable in itself.