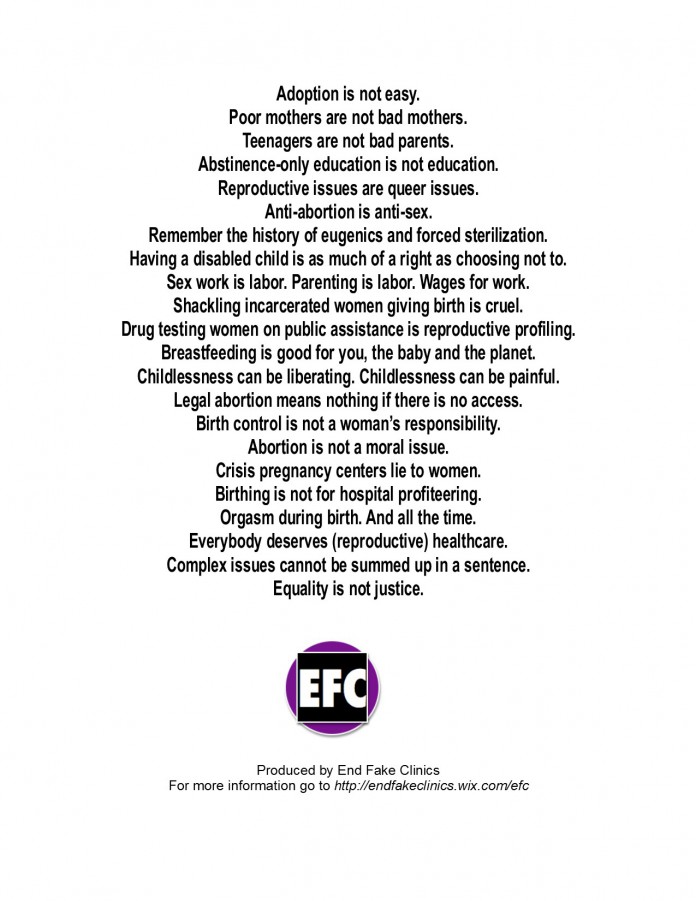 We are End Fake Clinics. We are feminists. We are queer. We are students. We are for reproductive justice.

The reproductive justice approach to activism historically arose from the perspectives of women of color as a way to push the mainstream reproductive rights movement beyond their focus on abortion and birth control. Women of color recognized that the pro-choice framework was limited and exclusionary because all women don’t have equal choices and because all choices are not deemed equal. Reproduction goes beyond the workings of the body; how we understand reproduction is social, historical, geographic, political, and discursive. It changes over time and is impacted by the spaces and the places where we live. The reproductive justice approach brings together the concerns of reproductive rights movements with a broader focus on social justice, and, in doing so, works to change the broader structures that impact how people experience reproduction.

As members of End Fake clinics, we work to both raise awareness about these issues and create change at UCSB and in our various communities. In 2011, UCSB became the first university in the country to pass a ban that prevented crisis pregnancy centers from advertising on our campus. Other cities and universities have passed “truth in advertising” bills that require CPCs to state that they do not provide abortions. But UCSB went a step further to ban CPCs from advertising through any Associated Students entities on our campus. We are now working to prevent Network Medical, a local crisis pregnancy center, from advertising in our campus coupon books.

Throughout the year, we organize film screenings and talks by activists and academics that feature alternative perspectives on reproduction. This week we hosted a film screening of “The Business of Being Born” which outlines the problems with the medicalization of birth and the benefits of natural childbirth. Midwives from the Santa Barbara Birth Center led a discussion afterwards. And we counter the lies that circulate about abortion through our ongoing “Truth about Abortion” poster campaign.

End Fake Clinics comes together to inform ourselves and the broader campus community about issues that are not often discussed. We spread awareness of reproductive justice issues and perspectives on our campus through both our radio show, The Reproductive Justice Power Hour, on KJUC and also through a new poster campaign that critiques both anti-abortion and mainstream pro-choice ideologies.  Look for these posters today. You can see the posters all over campus.

We are End Fake Clinics. For more information, search End Fake Clinics on Facebook and check out our website: http://endfakeclinics.wix.com/efc  We meet on Tuesdays at the Women’s Center at 6pm. Join us as we explore various reproductive justice issues and work to make our campus and communities more just.