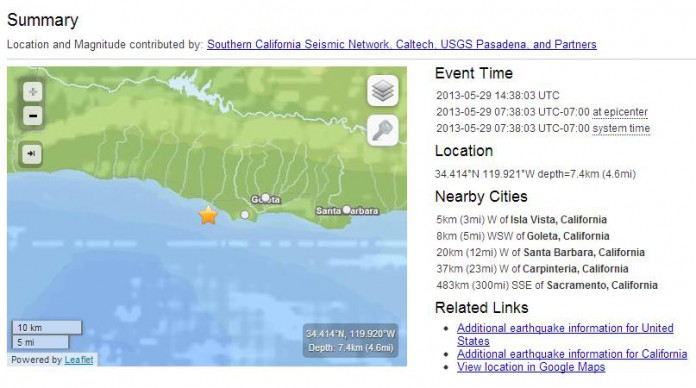 Isla Vista residents were rocked awake by a 4.8 magnitude earthquake that began in the Santa Barbara Channel at approximately 7:38 a.m. this Wednesday morning, according to the U.S. Geological Survey.

The quake’s epicenter lay a mere 3.8 miles west of Isla Vista, near the Platform Holly oil rig, at a depth of roughly four miles. The Tsunami Warning Center in Palmer, Alaska, has not issued any wave-related warnings, but further analysis of the quake may shed new light on the situation. Aftershocks can be expected at any point from a few hours after the quake to several months later. They are generally less powerful, but they may be strong enough to additionally damage weakened structures.

A Google Public Alerts post from a U.S. Geological Survey seismologist warned locals to stay away from the beach for the time being, to look for and extinguish small fires, and to anticipate traffic light outages. No injuries or damage have been reported at this time.