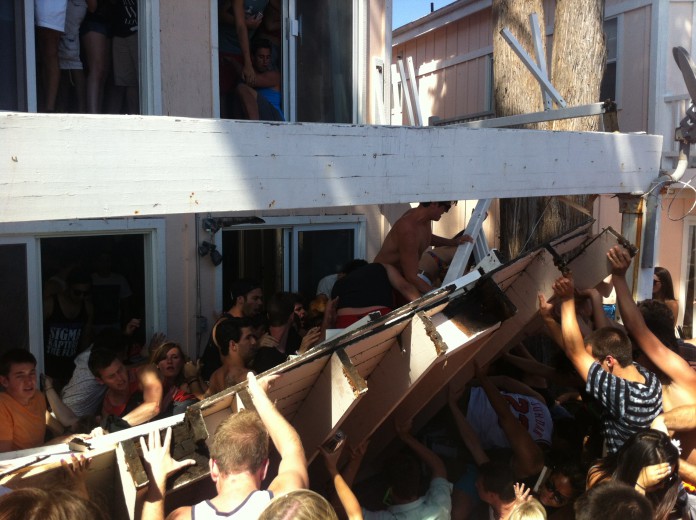 After four students were sent to the hospital when a 6643 Del Playa balcony collapsed during the Deltopia festivities on April 6, a lawsuit was filed by Stephanie Grace, a fourth-year sociology major at University of California, Santa Barbara, against Ronald Wolfe and Associates, the property manager, and the Elliott Family Trust, the owner of the building, citing the failure to properly take care of the building.

Robert Clayton, part of the Los Angeles based firm Taylor and Ring, picked up her case. His firm specializes in catastrophic personal injury due to dangerous conditions on private or public property.

“She was part of Deltopia, she felt some rubble fall on her head and the next thing she knew the balcony fell on her,” Clayton said.

In addition to a bump on the head, Grace sustained multiple injuries, including a fractured pelvis and bruising over the entire left side of her body, and it will take a few months for the bones to re-fuse, said Clayton.

Since the incident, Grace has been unable to return to her job as a lifeguard.

“She cannot be active and has to use her crutches,” Clayton said. “She also has to be careful while her bones are healing.”

Currently, Grace has filed a lawsuit “suing the managers and owners of the property for the dangerous condition of the property itself [and] seeking money damages for injuries resulting from the dangerous condition of the property itself,” Clayton said. They are waiting for the defendants to answer their questions within in the next 30 days. Additionally, Clayton is working on a second lawsuit against the same property managers and owners. The second lawsuit was filed by a University of California, Riverside student who also sustained injuries due to the collapse of the balcony. As a result, these two cases will be consolidated.

The lawsuit has yet to be resolved.