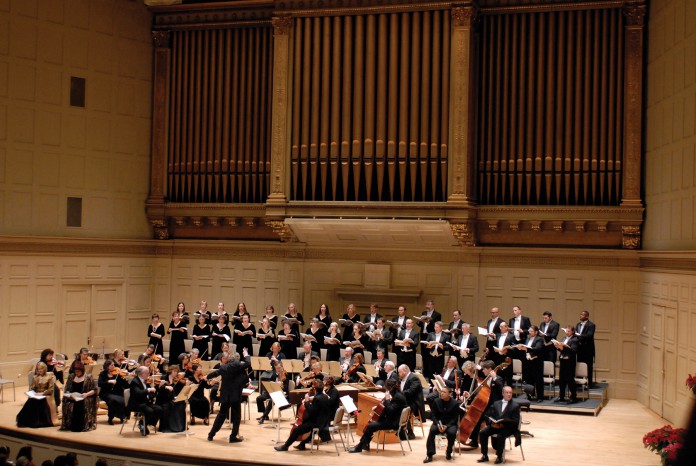 University of California, Santa Barbara’s Campbell Hall transformed from a mundane lecture space to a musical wonderland with the debut performance of the Handel and Haydn Society on May 1. Inspired by 18th century classical compositions of Italy, including Antonio Vivaldi’s famed “The Four Seasons,” H & H’s program highlighted the rich refinement and exquisite turbulence of the score.

In an age when recorded music reigns supreme, it is striking to witness music being brought to life so immediately and artfully onstage. In particular, there is poignancy to instrumental music that demands an audience’s full attention and active involvement. The sensitivity required to appreciate the strings’ stirring sounds, for instance, reveals how rarely we take the time to truly listen.

This was brought into stark relief by the H & H, whose masterful performance rightfully demanded the audience’s full engagement. In return, the musicians offered beauty that was definitively of-the-moment, yet would reverberate in waves of wonderment long after the final note had sounded.

Founded in 1815, the Boston-based H & H has been around for almost two centuries and has a rich history in its own right. It is dedicated to sharing the beauty of Baroque and Classical music with contemporary audiences. The orchestra takes care to perform using period instruments—hence the presence of a harpsichord and an archlute, a most magnificently striking instrument, in the program. The result is music that is authentic, yet also alive and vibrant.

In addition to technical mastery, the musicians of H & H exhibit evident enjoyment of live performance. Appearing molded to their instruments in a both tender and trance-like pas de deux, the musicians’ movements visually bring out the cadences and nuances of the score.

Of particular note was the performance quality of Aisslinn Nosky, concertmaster and first violin. Nosky, an animated redhead, has a captivating onstage presence and as a human extension of the violin would almost mime the music. Evidently enthusiastic about the process of music creation, she combines passion with playfulness in profoundly rich interpretations of centuries-old scores.

Another defining aspect of the event was the notably older audience demographic. While understandable in light of the younger age cohort’s predilections, it still seems a shame considering the timeless value of beauty such music affords to all ages. A great classical music performance takes one on a journey requiring rapt attention that is all too rare, but all the more valuable, in the era of momentary diversions and electronic escapism. It is indeed a most sublime pleasure to be freed from such distractions and become fully immersed in the beauty of a passionate musical discourse taking place onstage.

The H & H performance, courtesy of the ever-stellar UCSB Arts & Lectures programming, was refreshingly exquisite and consummately professional. The evening was an auditory adventure that both spans and transcends centuries.