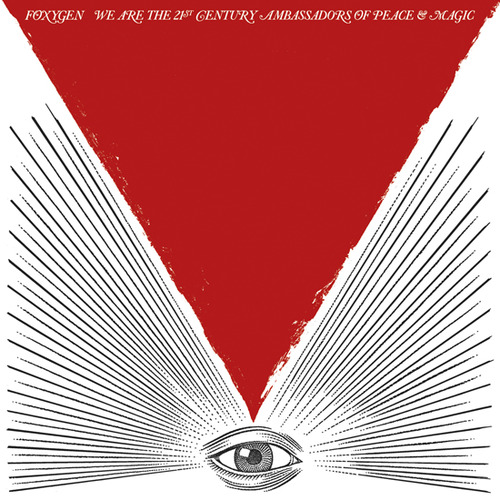 Foxygen’s new album rides a hallucinogenic caravan of 60s influences, modern wit, and collective fantasy. Despite their kaleidoscopic vision for the past, they’re poised headlong for the future. The Los Angeles indie-rock duo’s breakout 2013 period piece, “We are the 21st Century Ambassadors of Peace and Magic,” doesn’t break new ground—it asserts the mystic splendor of the earth we know.

The album was released on Jan. 22 (so this review is a little slow on the draw); nonetheless, Foxygen is now permeating a more widespread musical consciousness. Dynamized by engaging and self-assured core members Jonathon Rado and Sam France, their music delves into psychedelic, experimental, and avant-garde musical themes. The band caught headlines in March for an erratic SXSW performance, but this has stimulated their momentum rather than hindered it.

The nine-track album embarks with the hazy, ethereal echo of “In the Darkness.” Spiraling between blues piano progressions, reverberating vocals, and background horns, France intones, “So without further ado / we’d like to introduce you to / The darkness.” The rhythm has kicked in; the band heralds that a journey is underway.

“No Destruction” sets an emblematic tone for the songs that follow—acoustic guitar and ethereal organ frame a sardonic ode to a phantasm named “Destructo.” France sings, “There’s no need to be an asshole, you’re not in Brooklyn anymore.” Foxygen are neo-psychedelic, folk-rock revivalists. Recalling classic sounds from the Kinks and the Rolling Stones, their musical lineup manages resounding audio quality. France’s singing is influenced by Loud Reed and Mick Jagger, bounding between a speaking-voice drawl and a wailing falsetto. Between jazzy organ beats, fuzzy guitar, and airy harmonies, Foxygen’s album plays like a restless cloud floating over Woodstock.

The title song is a ringing psychedelic manifesto. The most lo-fi cut from the album, it bounds on a walking surf-punk beat, the vocals echoing on top of a portentous, flowing organ. Following a banshee wail crescendo, France ties together the foundational philosophy of the album itself—“Free to live, Free to do what I want / Go out and get it.”

Their edge is a sophisticated humor, fun and upbeat, holding a serious face but on the verge of bursting out laughing at any moment.

The most commercially accessible song on the album is “San Francisco,” a wayward breakup tune that breathes a conversation between France and an angelic female voice—“I left my love in San Francisco (that’s okay, I was bored anyway) / I left my love in the room (that’s okay, I was born in L.A.).” The use of the glockenspiel recalls the Velvet Underground’s “Sunday Morning,” aptly defining the song as an easygoing day from that archetypal aesthetic. The light and sometime off-kilter rhythms give the tune a frolicking and amorous pace—like walking late to class, your mind focused only in the moment.

Other standouts from the album include “Shuggie” and “Oh Yeah,” two grooving pieces with mass sing-along potential, showcasing Foxygen’s interest in catchy and swinging pop riffs. “Blue Mountain” is a hallucinatory utopian jam that capitalizes on wholehearted harmony, descending beats and jangling piano—the song comes full circle in the final minute where France sings “On the mountain God will save you / Put the pieces back together.” “Bowling Trophies” is a roiling, frenetic mash of fuzz, harmony and a blustering horn. It’s the musical illustration of The Dude from “The Big Lebowski,” tripping down the tube like a gutter ball into darkness.

“21st Century’s” throwback vibe isn’t for everyone. To some, Foxygen may come off like a clichéd, sophisticated hippie act. But their tour-de-force aesthetic produces a poignant, beguiling composition. With pleasant resonance, it blends daydream and delusion, invention and impersonation.