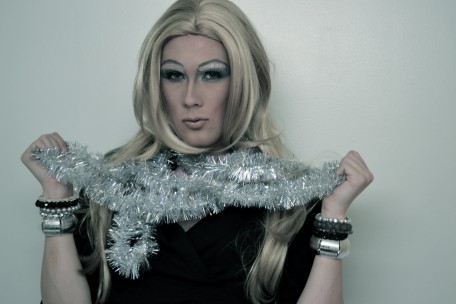 Q: How did you get involved in drag?
A: My best friend actually introduced me to drag. At first, I was skeptical, but I think it is more accurate to say that I was ignorant like the majority of society. I didn’t get it, but after my first transformation, it was easy to see why so many people love to express themselves in this form of art.

Q: What was your favorite moment as Avery Daniels?
A: After my show last week, a girl approached me for a picture. True, she was no super model, but she radiated kindness. While I was talking to her, I could see how she was in awe of my shoes, hair, and makeup. She said she wished she was that beautiful. Instead of doing a typical hair flip to signify that I agreed, I gave a hug and told her that she was beautiful. That’s what I love about drag. When you are all done up, people hang onto every word you say, so it is the queen’s choice how she wants to use that power. I use it as a way to make people feel special and understand that they are just as beautiful and fabulous as any queen out there.

Q: Have you ever encountered homophobia due to dressing in drag, and how have you handled it? What advice would you give to others trying to fight homophobia while doing drag?
A: Unlike most queens, I am lucky in the sense that I have only experienced love and positive energy while I am Avery. Nonetheless, it is a little disheartening when you are shopping and random strangers give you a disapproving look because you are in the “wrong” section of the store. It really sucks at times. It makes you feel like absolute s**t when you’re attempting to try on a pair of stilettos and a mother pushes her children away so that they cannot see you, because in her eyes what you are doing is not right or that it may ruin her children.

Q: How do you view the presentation of drag culture, like with the TV show “RuPaul’s Drag Race,” and how do you think this affects the perception of drag by people both in and out of the LGBTQ community?
A: I love the show, but at the same time I understand that it is not perfect. Yes, it does not represent all parts of drag. Yes, it does perpetuate elements of racism and sexism. Since it is so mainstream in terms of drag culture, it is what many people think of when they think of drag. Thus, it may influence people to hold very narrow images of drag. On the other hand, I love it because it introduces this controversial expression of art to people who do not know about it.

Q: Do you plan to continue doing drag after college?
A: Avery Daniels is definitely not done with UCSB. She will continue her reign of glamor until Nick graduates. No doubt about that. I have only started and have no plans of giving up anytime soon.