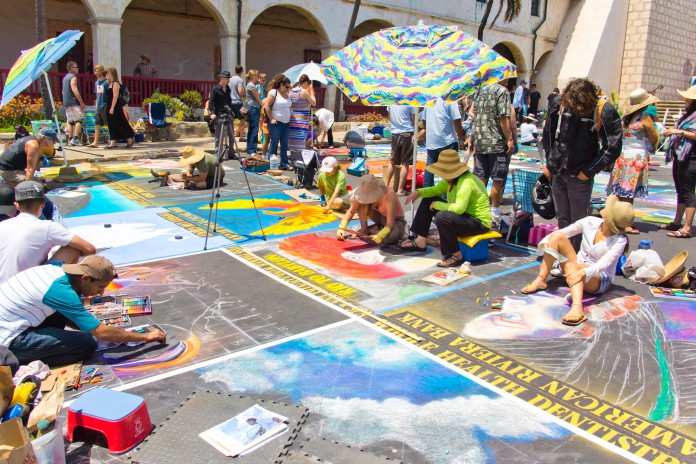 This festival drew over 150 artists, from master Italian street painters to kids using pastels to paint the street in front of the mission. Drawings included all sorts of designs, ranging from sailboats and flowers to complex pieces of portraiture and abstract art. Additionally, there was an Italian festival happening alongside the street paintings featuring live music and a variety of meals and trinkets for sale.

Artist and architect Tom Meaney has been chalking at the Street Painting Festival every year since it started 27 years ago. This year, he chose to portray a picture of his children in chalk. He really enjoys the street painting festival because of the social scene and the process-driven nature of it.

“It is about creating art and not keeping art, which is fun,” said Meaney.

Second-year political science and comparative literature major Bonnie Casillas also commented on the fleeting nature of the artwork created at the Chalk Festival.

“The fact that it is temporary makes this event bittersweet,” she said. “I think people appreciate it more because it is something that cannot be replicated the exact same way in the future. I also think that the artists are very selfless with their art because they are obviously doing the art to exhibit it to an audience but they know that they will never be able to hold their art piece.”

The street painting festival lasts Saturday through Monday. Some artists labor away hour after hour for all three days, in the sun, working on their masterpiece. The most meticulous ones spend a whole hour drawing a person’s face, or an olive branch.

One piece that first-year global studies major Ashley Morgan liked was the painting of a green baby.

“I really enjoyed one piece that the artist based off of a black and white photo, and turned into something colorful,” she said. “The details put into the faces in the work were incredible!”

As the sun was sitting low over the horizon on Monday afternoon, the artists added the final details, picked up their worn down pieces of pastel sticks and packed their bags. The finished pieces of art sat there alone as the day ended. Over time, the rains will wash the grains of pastel down the drains, leaving a blank black canvas for people to start anew at next year’s festival.