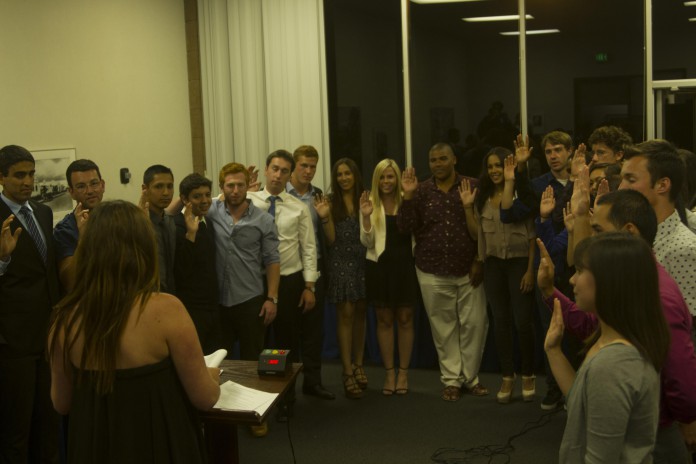 During the first of two Associated Students Senate meetings on Wednesday, May 22, exiting executive officers and senators gave their remarks on the past year, and while some were nostalgic and full of advice to the newcomers, others were more critical of their time in office and the way they were treated.

Former Student Advocate General (SAG) Yoel Haile, who was the first to give his Executive Report after Public Forum, used his time to detail a number of offenses against him throughout his time in office that started during campaign season in Spring 2012.

“During campaigning last year around this time, the AS Elections Committee called me in to have a conversation with them because they received an unprecedented amount of complaints about me and allegations of violations that I supposedly committed,” said Haile.

He then went on to list specific people and organizations that he believed had attacked or complained about him in some way between Spring 2012 and Spring 2013. These include AS President Jonathan Abboud; 2012-2013 Attorney General; University of California, Santa Barbara Hillel’s Rabbi Evan Goodman; The Daily Nexus; and various unnamed students.

The first tensions he noted were about not being well-transitioned into his new position by the previous SAG, and an anonymous message that warned Haile about people who were working to impeach him.

“A few weeks after I received this information, the AS attorney general approached me with questions he had about my position and what I was doing,” said Haile. “The attorney general was seriously being bombarded with screen shots of my Facebook statuses and pictures of me at different places on this campus as well as things that were only discussed during my staff meeting, which were confidential.”

Haile, who was primarily attacked for his political beliefs, believes he was specifically targeted due to his race because he is “an African man, a black man.” During the meetings in the beginning of spring quarter which dealt primarily with “A Resolution to Divest from Companies that Profit from Apartheid,” he gave his opinions on the issue, which he was criticized for.

After this, Rabbi Goodman criticized him for making “anti-Semitic statements.” While Haile denies that his statements were anti-Semitic, he also questions why he was specifically targeted for his speech when other students and executive officers had similar opinions, but were not targeted the same way, which other students agreed with.

“I think it was really unfortunate and very unjust how [Haile] was targeted this year, and I hope that never happens again in this association,” said former External Vice President of Statewide Affairs (EVPSA) Nadim Houssain. “It’s not right to target one person, and he brought up that this could be due to race…and I think that’s very legitimate and I think that what he had to go through was wrong. I personally spoke up at divestment and was never treated like that. Yoel really didn’t say anything more extreme than I said.”

Former President Sophia Armen also addressed some criticisms she experienced, but did not go into as many details as Haile.

“There were concerted efforts, even based on my very first meeting in here, to be taken to Judicial Council, and external influences which I have never revealed to anyone, and many of them over the past four years, which has cost me severely,” said Armen. “I have, in the face of all of this, still shown love and respect and waved and smiled at every single person that I meet here. It’s been difficult, but I have to say it’s all been worth it.”

Armen spoke mostly about overcoming the attacks against her, and not letting it affect the way she treated people.

“I was an underdog which no one thought would be here,” said Armen. “Some of the things I’ve seen from you all, with your names on them, but I still refuse to hate you, and you can’t take that from me, because I won’t carry hate in my heart. I am a president but I have never been anyone who believes that I am better than you, and that’s very difficult for some presidents to do.”

The meeting continued with more Public Forum and some Action Items, but ultimately concluded after tabling bills to the next Senate and some final concluding remarks from the old senators to the new.