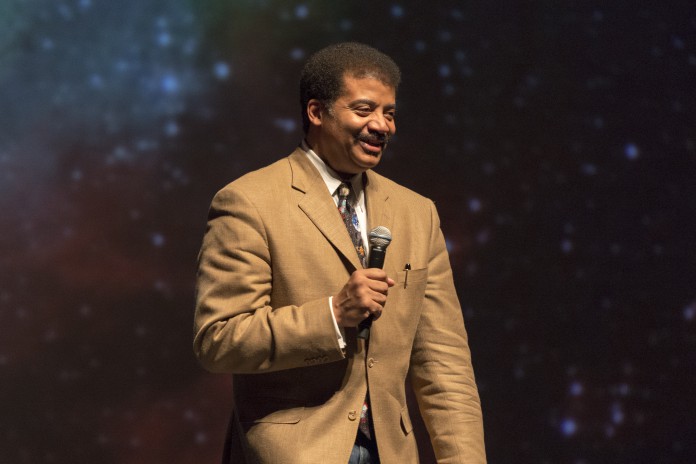 “Sassy as hell” is a phrase well-suited to describe acclaimed astrophysicist Neil deGrasse Tyson, who spoke at the Granada Theater on May 2. His lecture, titled “This Just In: the Latest Discoveries in the Universe,” was equal parts inspirational, mind-blowing, hilarious, engaging, and very frightening. It casually meandered its way through a huge variety of topics, including Twitter, rovers on Mars, the polar ice caps of Saturn, hate mail from third-graders, Saturn’s largest moon Titan, killer asteroids, the Higgs Boson particle, dark matter, the Big Bang, multiverses, and America’s growing fear of science—to name a few.

As an astrophysicist, the Frederick P. Rose Director of the Hayden Planetarium, and one of today’s foremost public scientists in the United States, deGrasse Tyson is a tour de force of the sciences. He has appeared on numerous talk shows including the Colbert Report, the Daily Show, and late night with Conan O’Brien, hosted a miniseries on Nova called “Origins,” and is a regular on the History Channel’s “The Universe.” Additionally, he has won many awards for his research and for raising awareness for the sciences. In 2004, he was recognized by NASA with their highest civilian honor, the NASA Distinguished Public Service Medal, and even by People magazine in 2000 as the sexiest astrophysicist alive. He has gained a lot of popularity through social media, particularly with his poignant tweets, which he called in his lecture “brain droppings,” and on the website reddit.com, where there is a very popular meme in his likeness and he is affectionately referred to as NDT. To supplement his presence online and on TV, deGrasse Tyson has written many books on astronomy, including the New York Times best seller “Death by Black Hole.”

DeGrasse Tyson’s lecture was yet another testament of his expertise and appeal. To the pleasant surprise of the audience, he began his talk by taking off his shoes and cracking jokes. The crowd’s admiration for him was apparent from the outset, observed through the consistent laughter and exclamations that many of his points elicited. His talk revolved around the latest changes in science, like the title said it would, but toward the end became more about presenting the frightening state of scientific funding in the United States, and the effects of our culture’s attitude toward scientific research. He backed up his talking points with mind-blowing facts, new scientific theories, and intriguing advancements one would expect from someone like deGrasse Tyson. Tidbits of knowledge he shared  included the fact that Saturn’s largest moon, Titan, has lakes and rivers of liquid methane in much the same kind of system that water exists on Earth; deGrasse Tyson also shared that scientists speculate that we are ignorant of about 96 percent of what composes the universe, particularly in regard to dark matter and dark energy. To close, he ended his speech with a final reminder about the importance of a cosmic perspective.