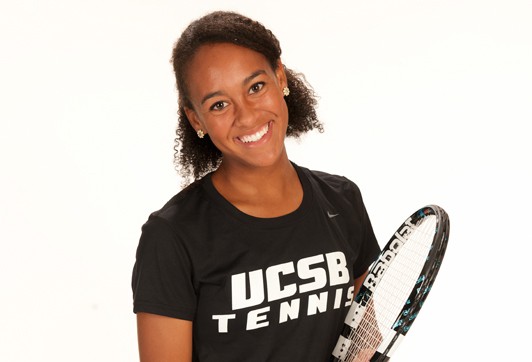 Q: How did you get involved with tennis?
A: When I was little, my dad coached my brother and sister. They’ve been playing before I did and it kind of became a family thing. When they started learning how to play in tournaments, I started to play as well. And so yeah, my dad was all three of our coach.

Q: What’s the best part about working with your team?
A: I would say that the best part would be the friendships that I have made. You get so close to your teammates because you go through so much together. You have to suffer through every practice together, every tournament, and every stress, but you get so close to these girls because you all are so competitive and want to win. We’re in the same team so it’s really fun and yeah, it’s awesome having people who can relate to you and have the same goals as you.

Q: What was your biggest challenge you faced while trying to achieve your goal as a tennis champ?
A: The biggest challenge I’ve faced as an athlete, well, I guess in general, it was really hard to just fully commit myself to playing tennis. In high school, I had a lot of friends who weren’t tennis players or athletes, so it was hard to sacrifice all the fun I could have had in high school, including to fit into parties on the weekends with my friends. Every weekend, I would be off to some kind of tournament. I would even have to miss some school. So, dedicating myself to one thing was the biggest challenge. But, when I was a sophomore in college, that’s when I realized that it was what I really wanted to do, so I tried to make that sacrifice and it was very well worth it, I would say. If you really want to be your best, especially with a sport, you have to spend majority of your time with it.

Q: Do you plan to pursue tennis even after college?
A: I don’t plan to pursue it professionally because that just takes a whole another level of love for the game because it’s very hard to do. I’m definitely going to play it for the rest of my life and probably still compete and everything, but I’m not planning on playing professionally because if I wanted to do that, I probably would not have gone to college. I would have started playing [professionally] in high school. But I’m going to play for the rest of my life and hopefully, teach my kids too, because it gave me so many opportunities and I love it.

Q: Why do you love tennis?
A: It’s hard [to answer] because all sports, you have a love and hate relationship because they’re hard and they take up so much time. But overall, you just love it. I can never ever quit and the reason for that is because I think it made me so strong mentally and obviously because it’s a sport, it’s fun. I love being competitive and when you work for something and you get results from it, it’s a great feeling. And tennis is a very individual sport, so you just feel really really good when you’re doing well. There’s a lot of pressure involved  because you don’t really have anyone helping you [during the game]. I think it’s a very fun sport. There’s a lot of dimensions to tennis. It’s not just about hitting the ball, there’s a lot more to it. It’s a huge challenge and it’s fun.