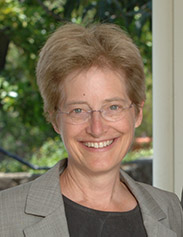 Q: What do you find most relevant about the field of religious studies, especially in regard to the current atmosphere of religious discrimination/tension in the United States?
A: Religious studies helps us get beneath the surface and look at issues more deeply. So with respect to your observation about religious discrimination/tension, although there is some religious polarization in the U.S. that parallels the current political polarization, social scientists (see Putnam and Campbell, American Grace) are finding that our families are so diverse in their views regarding religion that we in fact get along pretty well. Just as people tend to be more accepting of gays and lesbians when someone close to them comes out, so too people tend to be more accepting of divergent beliefs about religion when they are held by family members or others they know well.

Q: What aspect of your research over the years leading up to your being awarded the Guggenheim fellowship did you enjoy most, or find most intriguing?
A: For a long time I have been intrigued by unusual experiences in which people find religious or spiritual meaning. I am particularly interested in experiences, such as sensing presences, seeing visions, or hearing voices, that can be interpreted in multiple ways and in the ways that people decide how they should be interpreted, whether as signs from God, evidence of heresy, or symptoms of illness.

Q: How do you feel this recognition of your work will affect your current project,  comparing the role of unusual experiences in the earliest stages Mormonism, Alcoholics Anonymous, A Course in Miracles study groups, and New Age channeling? Can you expand on what it is you find most interesting about these?
A: The fellowship will allow me the time to finish working on this project. It also alerted some who are involved with these movements and resulted in their contacting me to offer resources and information, which is great. I selected these four groups because they are well documented instances in which an individual who had unusual experiences that were integral to the emergence of the movement. How their experience was interpreted and the role it played in the later evolution of the movement differed in each case. So I am looking at the emergence of these movements as a dynamic process that involves the interaction between an individual with distinctive new insights and a small group of collaborators who are intimately involved in the interpretation and development of those insights. At bottom I’m interested in how novel experiences provide people with new views of reality around which they then reshape their lives.

Q: What would you say to any UCSB students interested in religious studies?
A: It’s a great major (or double major or minor) if you are fascinated by questions of meaning and want to know more about how people the world over have struggled to answer the big questions in life. No one in our department tries to answer those questions for you, but we provide lots of tools for analyzing and understanding the way that people have wrestled with questions.

Q: What inspired you to pursue both religious studies and becoming an educator?
A: I was raised in a non-religious family and, so perhaps because of that, have always been fascinated by how and why people answer the big questions of life the way they do. Until I took my first religious studies course in college, I didn’t realize how sophisticated many religious thinkers are. That was an eye-opener for me. Although I initially planned on a more “practical” career, in the end, I decided to pursue what I found most fascinating. Looking back it was a great decision. My research gives me the chance to explore cutting edge questions and teaching allows me to interact with students who are wrestling with core issues in their own lives.