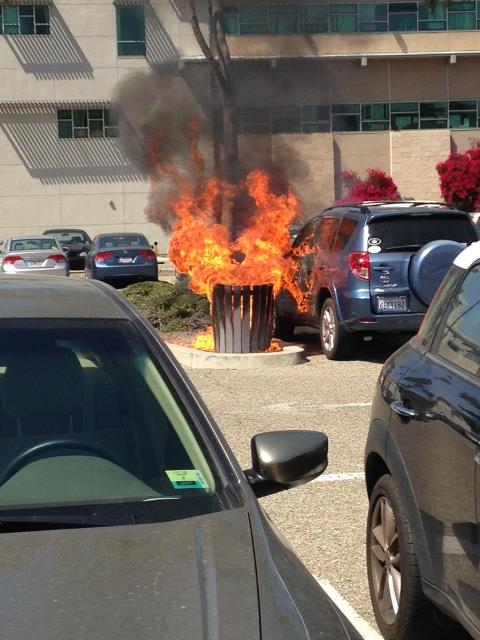 “First, we heard a pop,” described first-year psychology major Ryan O’Neill. “We got up and the car was on fire. Three minutes after it started, there was a second explosion—it was a giant mushroom explosion that went as high as the trees. The firefighters extinguished it all and there was a whole bunch of smoke. They opened up the hood and tried to figure out what happened.”

UCSB students and faculty alike gathered around the steps of Campbell Hall as police officers calmed the crowd and established a perimeter around the flames. A battalion of firefighters milled around the parking lot, dragging hoses and working to bring the situation under control.

“A car caught fire but we’re not sure how it came to be—whether it was a mechanical issue or something else,” explained UC Police Chief Dustin Olsen. “We have to look and investigate into it.”

A trash can next to the enflamed vehicle was set on fire prior to the car’s explosion, and by the time it was extinguished the can had been burned to the ground. None of the witnesses could say how the garbage can came to be on fire.

Police and bystanders alike commented upon the quick response of the UC Police Department officers and the firefighters.

“All the emergency personnel were here really fast,” said O’Neill. “The fire went on for about a minute.”

Police Chief Olsen lauded the emergency response team for bring the flames under control quickly and effectively, and mentioned that this Thursday’s heat—with a high of 80 degrees—made it a difficult day for dealing with fires.

“These guys did a great job, got it quickly, responded appropriately and kept everybody back,” said Olsen. “Thank goodness nobody’s hurt.”