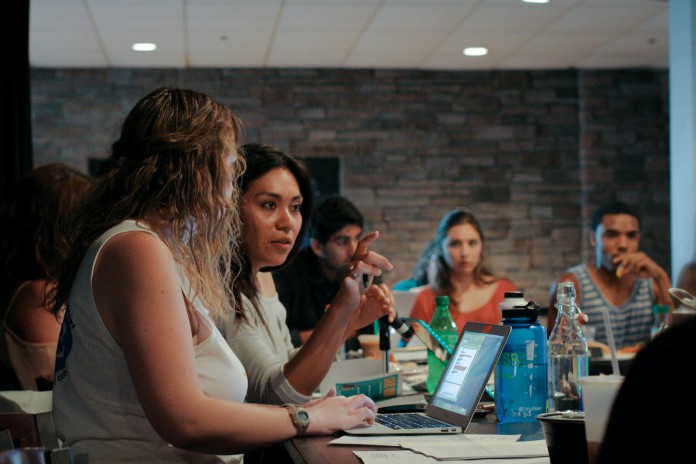 After a revision and much anticipation, “A Resolution to Divest From Companies Profiting From the Military Occupation of Palestine” was taken off the Associated Students Senate’s Wednesday, May 1, agenda.

The resolution, which was voted down two weeks ago in a 10-11-1 vote and originally titled “A Resolution to Divest From Companies That Profit From Apartheid,” was reintroduced with certain revisions. It was changed to a directional resolution, which would require a 50 percent plus 1 vote for passage, as opposed to it previous format, which required a two-thirds vote.

However, while the Senate was accepting the agenda, Sen. Alessandra Cianni made a motion to take the resolution off the agenda with the stipulation that it would not be re-added.

“This resolution has been on the table for three weeks…and if it passes tonight it will only be active for three weeks,” said Cianni. “According to legal code, this is the week that BCCs are supposed to come in and voice their opinions on the budget, and having a resolution that’s going to take up 10 hours is not appropriate for this week.”

Through a secret ballot, the motion passed. While the students who were against the divestment cheered, proponents of the resolution left in anger, along with Sens. Miya Sommers, Genesis Herrera (the two authors of the resolution), and Navi Kaur. As they left, a group of them chanted, “From the River to the Sea, Palestine will be free.”

Student sponsors of the resolution Hani Tajsar and Katlen Abu Ata gave statements directed toward Senate regarding their decision.

“We want to let you know, you as Senate, as Associated Students, failed your constituency,” stated Tajsar. “Even after going through these [revision] processes we were not even able to speak about the resolution nonetheless vote on the resolution.”

Abu Ata also expressed her anger about not being given the time to speak or be heard.

“You don’t represent me and the 30 student orgs that have worked to put this together,” stated Abu Ata. “We are ALL complicit in human rights violations and I will not stand by and allow senators to tell me that the work I have done is a waste of time.”

After the senators left, the meeting lost quorum. Senate listened to some BCCs discuss the budget, but ultimately unofficially ended the meeting after two hours.