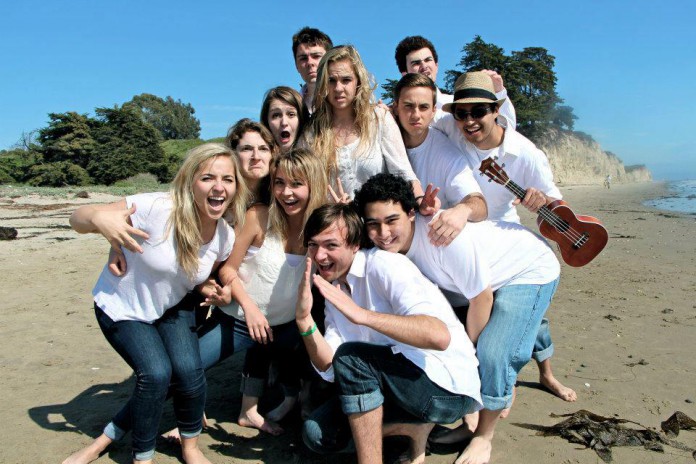 University of California, Santa Barbara singers lit up the stage on April 20 at the second annual Gauchella event, which was held at the Theater and Dance building on campus. Female a cappella group VocalMotion coordinated the festival, showcasing a plethora of other UCSB a cappella groups, dance groups, singer-song writers, entertainers, comedians, and festival booths galore.

“Gauchella is kind of the UCSB version of Coachella. You have your three venues and you have overlapping performances going on all the time,” VocalMotion singer and fourth-year economics and accounting major with a multimedia communications minor, Lisa Gray, said. “Ideally what it should eventually be one day is just a lot of tabling, kind of like the Fun and Fitness Festival at the beginning of the school year. Just like a really big exposure kind of event. It’s free and you just want everyone to see everyone else. A lot of these groups normally make you pay to see their shows or they are just once a quarter, or you just don’t know about them. People were sitting in the audience today telling me ‘I didn’t know we had these groups,’ and that’s why this is here.”

The origins of Gauchella go beyond emulating the famous desert festival. Gray explained that it grew out of a glee club that she started in 2012.

“The idea kind of came from that to have an event that was similar to the club itself, which was bonding genres. Because we have a cappella groups. We have dance groups. We have like different kind of things going on, and they don’t really cross borders and perform together. So I wanted to have something really collaborative, and that’s just where it started,” Gray said.

The event began with VocalMotion, who graced the indoor theatre stage at 1 p.m. The group’s delivery of beautifully layered harmonies and catchy moves was an upbeat way to begin Gauchella, and set the tone for the day. Among many songs, VocalMotion covered “Born This Way” by Lady Gaga and “We Made You” by Eminem. Immediately following VocalMotion, audience members were ushered to the outdoor stage to witness the crisply executed moves of the Urban Dance Company at 1:30 p.m.

In the same vein as Coachella, Gauchella featured a similarly packed lineup of performances that had viewers moving from stage to stage to catch the next best thing. It was impossible to catch every performance, but in addition to the aforementioned, I was able to witness the Philipino Cultural Night Choir sing one of the coolest covers of “Imagine” by John Lennon, Black Reign’s inspiring dance routine, Kenneth Mangum’s fervently memorable voice, the always spirited UCSB Pep Band, the heavenly aural expressions of New Century Voices, Mike Newsom, and Nolan Theurer performing an awesome version of “Crash Into Me” by Dave Mathews Band, Naked Voices’ cool rendition of a collage of all of Michael Jackson’s greatest hits, the InterVals, who performed two incredibly moving covers of “Raise Your Glass” by P!nk and “Jar of Hearts” by Christina Perri, and the duo performance of Robert Wojtkiewicz on guitar, coupled with Megan Gibbs’s passionate, enchanting voice.

My favorite performance by far came from the only all-male a cappella group on campus, Brothas From Otha Mothas, or BFOM. BFOM was the only group of the day that I saw get cheered on and off the stage by an overwhelming surge of audience enthusiasm. It was my first time seeing the group, and if their overwhelming welcoming by the audience didn’t say enough on their behalf, their performance most certainly did. BFOM magnificently combined music brilliance with hilarious entertainment; for example, they skillfully covered a very intriguing cover of “Take On Me” by A-Ha, with filtered in moments of fake trumpet playing by Daniel Park and the all-encompassing awkward silence, which had the audience giggling for seconds of sitting on the edge of their seats anxiously anticipating what was next.

“Hopefully people had a good enough time that they will want to come back and then invite their friends. Kind of like a word of mouth type of thing. And as the acts get better and when you get better acts, the event will continue to get better because the standard is raised,” Ian Charbonnet, a BFOM member and fourth-year psychology and philosophy double major, said. “So I would say that the next couple years of Gauchella should be continually getting more and more fun, more and more entertaining, and with more and more people.”