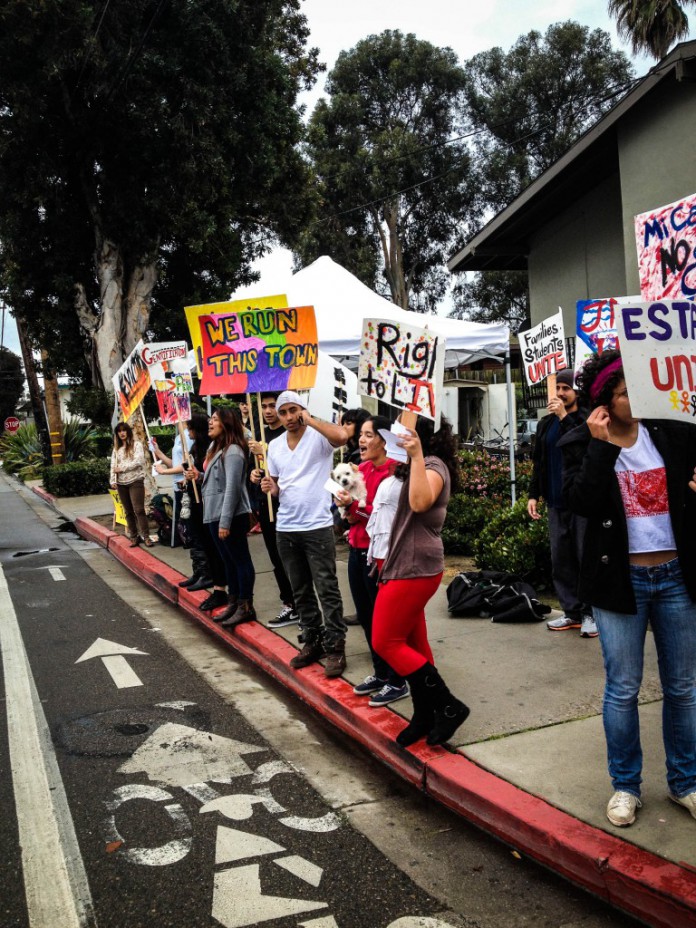 Platler Capital Management bought 781 Embarcadero Del Norte, an apartment complex in Isla Vista, last April. A mere four days after the firm bought the complex, the new owner began raising the rent of the units, according to the Santa Barbara Independent. That June, the owner of the complex began remodeling and evicting people.

In January, UCSB students and the Isla Vista Tenants Union protested the evictions of these 16 families. They expressed concern about Matthew Platler’s actions, asserting that he deliberately evicted low-income families in order to raise the rent and lease to students. A Change.org petition by the EVPLA and the IVTU attempted to address Platler, saying that though he did not break any laws, his actions were “unethical and in violation of Santa Barbara County Ordinance 4444.”

“Any tenant who is displaced or subject to displacement from a residential rental unit as a result of an order to vacate or an order requiring the vacation of a residential unit…shall be entitled to receive relocation benefits from the owner as specified in this chapter,” states the ordinance.

The petition says if Platler does not remedy the situation, UCSB students and other Isla Vista residents will formalize a boycott of his building.

Today, almost one year after the evictions began, the Change.org petition is still circling with a little over 500 supporters. Platler has not responded to the petition, but some of the evicted families have been let back into the complex.

According to Hannah Pierce, an author of the petition, most students are unaware of this mass eviction. She suggested this may be because many students see Isla Vista as more of a temporary situation than a community, a place to stay between high school graduation and college graduation. However, she added that once people hear about Platler’s actions, they become concerned.

“They support Latino families as part of the Isla Vista community,” Pierce said. The indifference from students comes from a lack of awareness more than a lack of concern.

Platler has gained notoriety, but he is not the only landlord with an abusive reputation in Isla Vista.

“Personally, I am tired of seeing these Latino families being taken advantage of by many companies during my short four-year stay,” said one of the people who signed the petition. As this statement indicates, the problem did not necessarily start—and will not necessarily end—with Platler.

“These companies own many houses and apartments so they set their rent high and raise it every year,” says myislavista.com, a website that lists companies to rent from in IV. “However, they are the easiest to find housing from and do business with.”

Pierce offered ways for students to recognize and combat these abusive practices.

“You want to be careful if a landlord wants to lease quickly or seems desperate,” she said. In addition, massive renovations can be a sign that landlords are seeking to raise rent by advertising the improvements in their buildings. Of course, researching your landlord is always worth the time as well.

Pierce encourages anyone interested in housing issues such as this to attend the IVTU meetings, which are held at 5 p.m. on Tuesdays at 6550 Pardall Road, Suite B (above Grafikart). In addition, the petition urging Platler to support Isla Vista families can be found at http://www.change.org/petitions/petition-platler-to-pay.