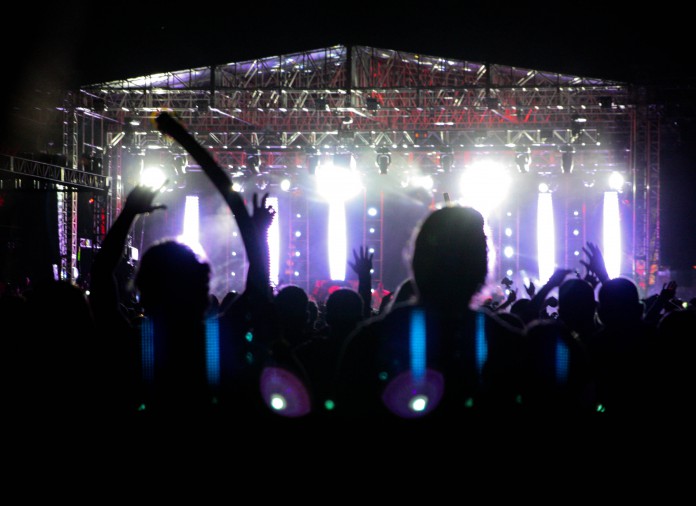 The past three days have been a complete blur, as if I set a camera on long exposure and carried it around as I ran between shows, the campsite, and amongst the aesthetically novel art installations scattered throughout the festival grounds. By Sunday, the weight of the weekend seemed to take its toll not only on me, but other festivalgoers as well. Coachella is a cornucopia of aural, visual, physical, and emotional stimuli, and the crowds seemed mellowed out not only as a result of accumulated fatigue, but also from the heaviness of the dust that hung in the surprisingly chilly air. However, the decrease in temperature and energy didn’t appear to translate to the level of enthusiasm for the day’s lineup.

I arrived earlier than the previous two days to catch Deap Vally’s 12:00 set, which kicked off day three at the Mojave tent. The rock duo, which is comprised of Lindsey Troy and Julie Evans, gave a performance that was a breath of fresh air and feminine empowerment. Singer and guitarist Troy, who hails from San Diego, doesn’t evoke hard rock vibes based solely on her appearance – her petite frame and floral sunglasses posed a dichotomous relationship to the resonant, growling voice that hit the crowd like a freight train when she began singing. Taking command of the stage and the power of her vocal abilities, Troy gave a phenomenal performance that was matched by Evans’ drumming skills and vigor. Evans, donning a metallic gold dress that set off her wild red head of curls, complemented Troy’s singing and guitar playing with intense rhythms that, at one point, caused her to knock over one of her cymbals. The duo played songs off of their debut album, which comes out this summer, such as “Walk of Shame” and “Gonna Make My Own Money.” Based off of their confidence, natural chemistry, and sheer skills, I predict that Deap Vally’s going to go far. Keep an eye out for this hard-hitting pair, and don’t let their good looks distract you from their well-developed and infectious sound.

After Deap Vally’s show, I was less than impressed by the music put out by Grimes (otherwise known as Claire Boucher), a Canadian artist whose performance was characterized by synth and vocal looping. I had a hard time understanding what she was saying, which was probably attributed equally to the high register of her voice and the looping, and found it difficult to get immersed in her music. Although I appreciated her incorporation of diverse vocal influences, in its entirety I thought her performance fell flat, and left early in favor of The Lumineers’ set that commenced at 4:45. I’d only heard The Lumineers’ popular song “Ho Hey” before seeing them live, and enjoyed the folk quality of their music that was aptly accompanied by the hazy afternoon sun. Songs such as “I Ain’t Nobody’s Problem,” which showcased the band’s use of piano, mandolin, and accordion, gave off an affable and full-bodied vibe.

The onset of dusk brought fans to the Mojave tent once more for the synthpop duo La Roux, who made their debut after having to cancel their appearance at last year’s festival. A ten-minute delay was forgiven within the first opening notes of “In For the Kill,” one of their most well-known dance songs from their eponymous debut album, and preceded a set that featured tracks including “Tiger Lily” and “Bulletproof,” another fan favorite. Singer Elly Jackson looked notably calm and composed onstage, but evoked enthusiasm that was congruent with the high-energy, blithe nature of the music.

Electronic music artist Pretty Lights, aka Derek Vincent Smith, was nothing short of stellar when he performed at the Outdoor Theatre at 7:45. Oscillating between genres and marrying instrumental influences such as guitars, saxophones, and piano with electronic melodies, he kept the crowd actively engaged and in the groove for the duration of his set. The audience was also illuminated by harlequin lights that streamed out into the crowd from the stage, which paid homage to his stage name. Although the syncing of light effects is not an uncommon component of electronic shows, Pretty Lights’ use of it particularly emphasized the diversity of his samples and his ability to meld music together.

A last-minute decision to leave my spot at the Outdoor Theatre for only ten minutes shattered my chance to see Wu-Tang Clan, which took the stage after Pretty Lights and drew massive hordes of people. After seeing the crowds for the past two days’ headlining acts, I knew that it would be nearly impossible to integrate back into the crowd, let alone find my friends. I abandoned it in favor of snagging a favorable spot early at Coachella stage for the Red Hot Chili Peppers concert, which started at 10:15 and went until 1 a.m. Even though I saw them less than a year ago at the Staples Center, their show was one that I was looking forward to the most, and they didn’t disappoint. Their Coachella set mirrored the beginning and ending of the show I saw in 2012, starting with “Monarchy of Roses” off of their latest album “I’m With You,” and ending with “Give It Away” from the album “Blood Sex Sugar Magik,” but the Peppers ensure that each performance is like a fingerprint – they have a plethora of songs to draw upon and mix up, and in true RHCP fashion, they interspersed improvisational bits between songs that often showcased conversational playing between bassist Flea and guitarist Josh Klinghoffer. Other songs were the funk-friendly track “Can’t Stop,” the more deliberately and slowly rhythmic “Californication,” “Parallel Universe,” and “By the Way,” which I was holding out for. Despite my futile hope for a surprise appearance by Daft Punk, I left the RHCP performance content from the lingering effects of the Peppers’ music, and morose only because I knew that their performance signified the end of my wonderfully hectic, music-fueled, and ultimately unforgettable weekend here at this desert oasis.

If there is anything I have taken away from my experience at Coachella, it is to welcome the unpredictable with open arms. When you’re ripped from a daily, air-conditioned, and schedule-driven lifestyle and thrown into a desert for three days with thousands of people (many who are inebriated in some way or form), you’d best believe that things won’t always go as planned. And that, I believe, is the beauty of Coachella and other music festivals. They’re escapes from the ordinary, worlds where music is sovereign and the adherence to organization is merely an option. I could go on about what they are, but I’ll leave that up to you. Find out what it is for yourself, and create your own Coachella. How to do so, I’ve learned, is completely idiosyncratic. The Lumineers – (left to right) Ben Wahamaki and Stelth Ulvang The breast painting better be free. Dust storms begin to pick up, causing festival-goers to put on handkerchiefs and masks. Couple dancing at Nick Cave and the Bad Seeds Crowd at Outdoor stage for Wu-Tang