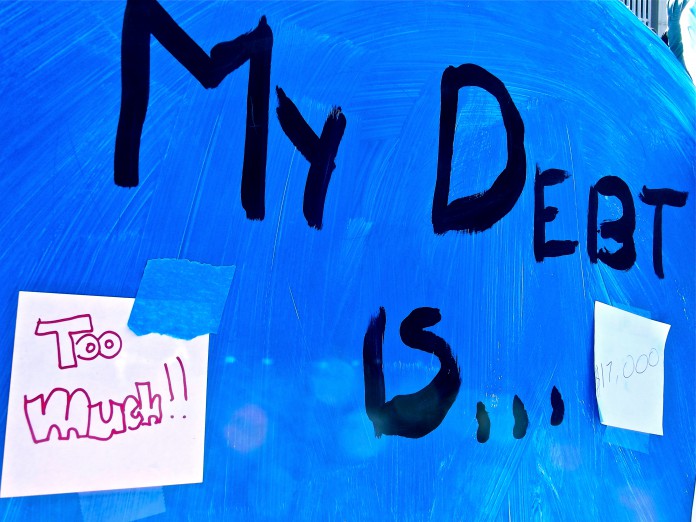 The student organization CALPIRG held a press conference at the University of California, Santa Barbara last Thursday, April 11, to bring attention to a potential student loan interest rate increase from 3.4 percent to 6.8.

CALPIRG spent the rest of the day taking photos of people holding paper and inflated balloons that included statements about how student debt is affecting them personally and how much college debt they hold. The balloons were coincided with the slogan of the campaign, “Don’t Inflate My Rate,” and CALPIRG chapter chair Rob Holland, along with the rest of CALPIRG, plans to mail the photo petitions to Congress.

The loan rate increase is connected to Representative Paul Ryan’s budget proposal that was released earlier that week and is currently being presented to and discussed with Obama and Congress.

Holland said that neither the budget proposed by Ryan, entitled “The Path to Prosperity: A Blueprint for American Renewal,” nor Obama’s budget proposal, “Budget of the United States Government, Fiscal Year 2014,” would solve the issue.

“With less than three months before the interest rate is set to double,” said Holland, “we need more time to work with Congress and the President to make sure any comprehensive reform is beneficial to students today and tomorrow.”

The interest rate is set to rise on July 1 unless the new budget includes legislation to maintain the current rate, as last year’s budget did. Last year’s fight against the increase garnered national attention, with Obama using it as a key campaigning point.

“Stopping this from happening should be a no-brainer,” said Obama while speaking at the University of North Carolina on April 24, 2012. “Helping more of our young people afford college, that should be at the forefront of America’s agenda. It shouldn’t be a Republican or a Democratic issue. This is an American issue.”

The current situation is similar to 2012’s, but Holland said the current political climate is taking a toll on the action and consideration the issue is receiving.

For students across the nation and at UCSB, the current situation is still dire, even if it’s not attracting national attention. CALPIRG intern and UCSB student Heather Goold spoke about her own experiences with debt and the effect it has on not only her education, but the country’s economy.

“Pretty much 44 percent of students have loans,” said Goold. “I’ll graduate myself with $60,000 in loans, so I feel like that’s equal to the amount of pay I might get coming out of college.”

Though the U.S. economy is moving toward improvement, Goold said prospects for current college graduates are still too dim to justify rate increases.

The petition extends beyond UCSB and California CALPIRG groups, as Holland explained, and 24 states participated in the event. U.S. PIRG Tax and Budget Associate Dan Smith recently commented on the new budget proposal and the effect it would have on the nation.

UCSB CALPIRG also held a conversation with Congresswoman Karen Bass about her Student Loan Fairness Act, which she said would cap the student loan rate at 3.4 percent and allow students to transfer their private loans into public loans with lower rates.

Holland said CALPRIG will continue to bring attention to this issue until the rates increase on July 1.