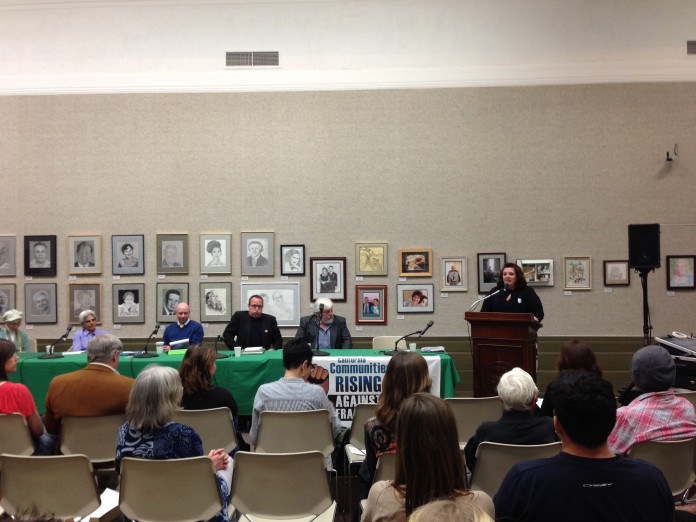 Hydraulic fracturing is the process in which gas and oil companies drill deep into the Earth’s crust to get to the bedrock that has gas or oil trapped underneath. The company sends down pressurized water down to break up the rock and to release the natural gas for a source of clean burning energy.

However, the Global Exchange is convinced that although the gas is clean burning, the processes of retrieving it is much more detrimental to the environment than burning fossil fuels.

The night kicked off with Sen. Jackson informing the 75-plus in attendance about the dangers of fracking in Santa Barbara County. She said that the drilling would use 180,000 gallons of well water that could otherwise be used to irrigate crops or as drinking water. She also addressed the oil company’s argument that this would create jobs in Santa Barbara County.

“We can create good jobs without effecting the environment,” said Jackson.

The oil companies don’t have any restrictions on fracking because it’s a new process, which worries the group because it allows companies to come in and drill basically anywhere.

“The reason no one trusts you [oil companies] is because we don’t know what you’re doing,” Jackson said.

Gautier was able to chime in on some of the environmental problems that accompany fracking. She notified the audience that fracking actually speeds up global warming. She said that the methane gas that gas companies try to capture ends up leaking into the atmosphere.

She said that methane gas is one hundred times more potent than carbon dioxide, two greenhouse gasses that are contributing to global warming.

“If we continue at this rate, by the end of the century, we will see a temperature change of between 10 and 12 degrees Fahrenheit,” Gauthier said. “How can fracking be stopped? By people like you. Put your grandchildren before profit.”

Shields, Blackwell, and Price all touched on how the public can stop the companies from coming into Santa Barbara County and drilling. Shields told the audience about how his city of Pittsburgh, Penn., was the first city in the country to ban fracking. He said it was because his citizens stepped up and spoke out against it.

Blackwell was mostly concerned with the contamination of the water that fracking left behind as a waste product. The water is toxic from the gas that it mixes with in the process.

Price encouraged the public to speak up.

“You don’t have a fracking problem,” said Price, “you have a democracy problem.”

He mentioned that if fracking happens, it’s much harder to fix the problem.

“Let’s try to stop trying to fix the symptoms, and let’s cure the disease” he said.

Biggs prompted the audience to join their cause and visit their website globalexchange.org for more information. The organization will continue their talks about fracking for the rest of week down the coast of California to San Diego.