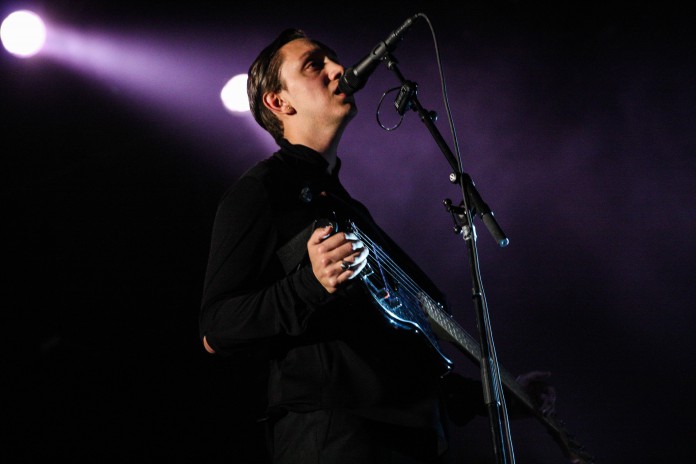 Most of the bands that I’ve covered so far were previously unknown to me, but two out of the three that comprised the evening lineup on the Coachella stage held a special place in my heart and iTunes library long before the lineup was released. While The xx and I are newly acquainted, my history with The Postal Service and Phoenix goes back to 2009, if not sooner. Although he might never read this, I have to thank my ex-boyfriend for introducing me to them (and many of the bands at Coachella this year). Even though our relationship didn’t last, many hours listening to The Postal Service’s “Give Up” and Phoenix’s “Wolfgang Amadeus Phoenix” together instilled in me a love for their music that has not faded, if not two albums’ worth of nostalgia for my high school years and my first love. I’m sure some of you reading this can relate.

Contrary to many of the other acts that have graced the Coachella stage so far, The Postal Service’s show at 9 p.m. was grounded in its simplicity. Dim, blue lights illuminated an otherwise dark stage, showcasing Ben Gibbard’s voice, Jenny Lewis’ backup vocals, and Jimmy Tamborello’s complementary, electronic pulse. The show commenced with “The District Sleeps Alone Tonight,” followed subsequently by “We Will Become Silhouettes,” “Nothing Better,” “Clark Gable,” and “Turn Around.” There is a sense of minimalistic intimacy that TPS evokes through their lyrics, I feel, that characterizes their sound and appeal. There is no need for flashing lights, or multi-octave singing. Gibbard may have been singing to thousands of people, but the innocent inflection of his voice and the relatable lyrics made me feel like he was speaking only to me. The prevalence of lines such as “You seem so out of context / In this gaudy apartment complex / A stranger with your door key / Explaining that I’m just visiting,” underscored with a subtly moving rhythm, is what gives the band an understated elegance that has prevailed over the past decade.

The xx, an indie pop band from England, made their Coachella debut shortly after 10 p.m., gracing the stage that, in the same vein as TPS, was faintly lit.

“It really is a dream come true to be playing in the States,” vocalist and guitarist Romy Madley-Croft said. “Thank you for bringing us here.” Their set, which included songs from their 2009 debut album xx and their 2012 album Coexist, was demonstrative of their sound progression over the past few years. Songs from xx, such as “Shelter,” “Infinity,” and “Nightime” were featured alongside Coexist tracks “Angels” and “Reunion,” showcasing the band’s lack of emphasis on building up to choruses and their reversion to softer, less upbeat melodic structures that support Coexist’s more somber lyrical themes. The music wasn’t dominated by a complete sense of melancholy, however; less conventional elements like steel pans and nuances of Jamaican music contributed glimmers of juxtaposing vibrancy.

The night culminated with French alternative rock band Phoenix, who played a set that spanned an hour and a half. Despite opening with their Oriental music-influenced single “Entertainment,” which is off their latest album, “Bankrupt!”, they drew primarily from their 2009 album “Wolfgang Amadaeus Phoenix.” Upbeat, more pop-like songs including “Lasso,” “Fences,” and “Girlfriend” made it clear why Phoenix’s songs are so commercial friendly; tracks such as “Love Like a Sunset” confirmed the band’s classification as an alternative rock band, instrumentally ascending over the course of about five minutes before emphatically leading into the short lyrical portion of the song. Like a sunset, the song’s climactic buildup was gradual, rich, and beautiful, only to fade away into a soft glow after hitting its saturated pinnacle. Lead singer Thomas Mars followed up with an acoustic version of “Countdown (Sick For the Big Sun),” jumping over the audience barrier to sweetly serenade the crowd.

At this point, it’s safe to say that everyone in the audience was holding a collective breath in anticipation of Daft Punk, who was rumored to make an appearance. I’d heard that they were even at Coachella, and considering that their new album drops in May it would have made sense for them to promote themselves with a bang. Also, they made an appearance at Phoenix’s 2010 performance at Madison Square Garden, so a second collaboration would not have been unfamiliar. However, the Coachella coordinators threw the audience a curveball and, instead, randomly sent out R. Kelly, who proceeded to perform a mash-up of his grooving “Ignition (Remix)” with Phoenix’s “1901.”

To finally close the set, the band reprised “Entertainment,” which prompted Mars to run out into the crowd and climb up onto the sound booth before crowd surfing his way back to the stage. The end to a long night was epic, electric, and nothing short of what I would have expected from a band like Phoenix.

I’m still holding out for Daft Punk on Sunday night, though. Polar Bears soaking up some desert sun and water. Attendee displays his excitement for The Postal Service. Oliver Sims of The xx. Romy Madley Croft of The xx.