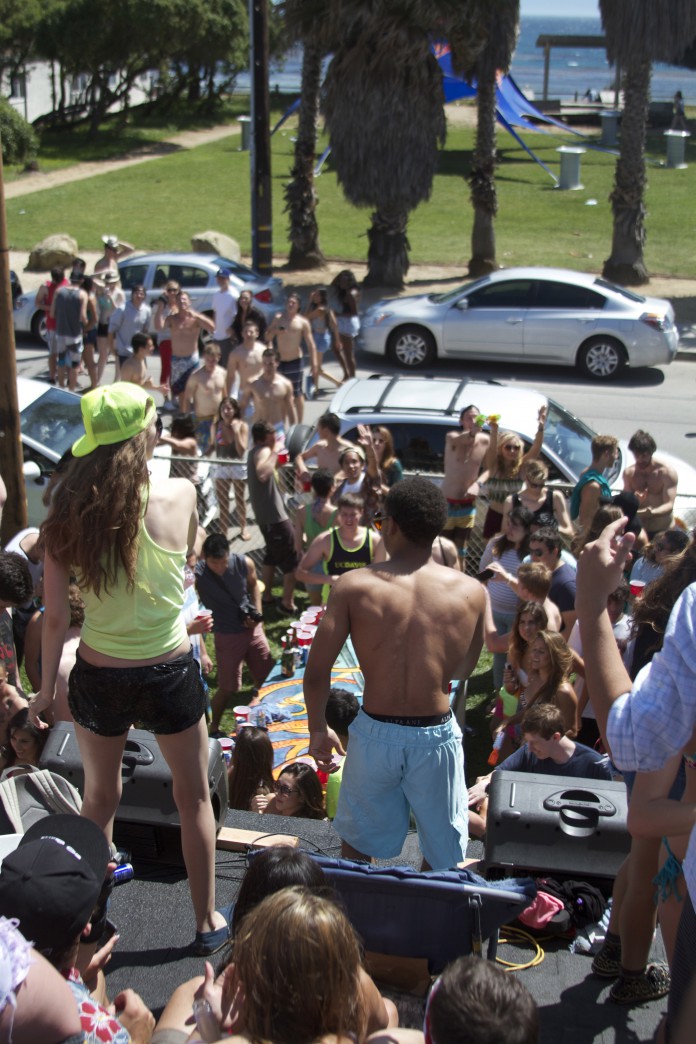 Isla Vista’s fourth Deltopia event took place this past Saturday as up to 18,000 revelers crowded the streets, balconies, and rooftops of the beachside community. The event’s attendance nearly doubled that of Deltopia 2012, and yielded a growing gamut of arrests, citations, and injuries.

Deltopia was first held in 2010, when authorities closed local beaches on several April weekends in an effort to prevent Isla Vista’s infamous Floatopia event from contributing to the environmental degradation of the community’s beaches. Isla Vistans protested the newly-enacted beach barricades by parading down Del Playa Drive replete with inflatable boats and beach apparel. The event has continued to grow in the ensuing years, and according to Sheriff’s Department statistics, its attendance ran from 15,000-18,000 revelers in comparison to last year’s estimate of 8,000-10,000.

“We anticipated a large crowd and brought in extra staff to deal with enforcement and crowd control,” said Santa Barbara Sheriff’s Department spokesperson Kelly Hoover. “We also had representatives from County Fire, CHP, Count Paramedics, and Alcohol Beverage Control there as well.”

All infractions aside, the majority of Deltopia attendees enjoyed a warm April afternoon in a cocktail of camaraderie and debauchery. The weather—cited in a Sheriff’s Department press release as a likely explanation for the increased turnout—reflected the beachy spirit of the holiday with a high of 82 degrees.

Despite the good times, Deltopia was marked by tragedy: 18-year-old California Polytechnic University San Luis Obispo student Giselle Esme Ayala was found deceased on the beach west of Campus Point around 8:20 a.m. on Saturday morning. Her family has been notified along with the Cal Poly community, and Santa Barbara police are conducting an investigation into the circumstances of her death.

In another notable instance, a wooden balcony holding several dozen Deltopia participants collapsed from the second floor of an apartment at 6643 Del Playa Drive at approximately 3:00 p.m. on Saturday. The balcony cracked from the weight and slid slowly off of the side of the building as a pile of Deltopia revelers fell to the ground in a jumble. University of California, Santa Barbara third-year environmental studies major Emily Lam, who was standing on the balcony when it fell, related how house residents and others at the scene banded together to mitigate the damage before an ambulance showed up.

“We were standing on it and we heard a snap. You could hear the wood collapsing, and people screaming and running,” described Lam. “Most of the house owners came and started pulling people off [of the pile] and making sure they were okay, putting them in the house and out of the way. Everyone really came together.”

Lam was quick to emphasize, however, that the collapse of the balcony did not correlate specifically to the fact that it took place on Deltopia weekend.

“It was more of a structural issue,” Lam said. “I think that we were partying responsibly and that it was a freak accident. It was pretty standard Isla Vista before the balcony fell.”

Responsible revelries or no, police department statistics do indicate that more and more people are coming to Deltopia each year, and that more people means more citations and injuries.

“We were very concerned with the underage drinking and the number of injuries we saw this year,” explained Hoover. “We are looking at all our options for next year and plan to use social media to get the word out that we will be conducting strict enforcement and we expect people to behave responsibly.”

In light of the increased attendance and continuance of dangers posed by the event, the Santa Barbara Sheriff’s Department plans to work with the County, UCSB, and law enforcement agencies next year to determine ways to make Deltopia safer.