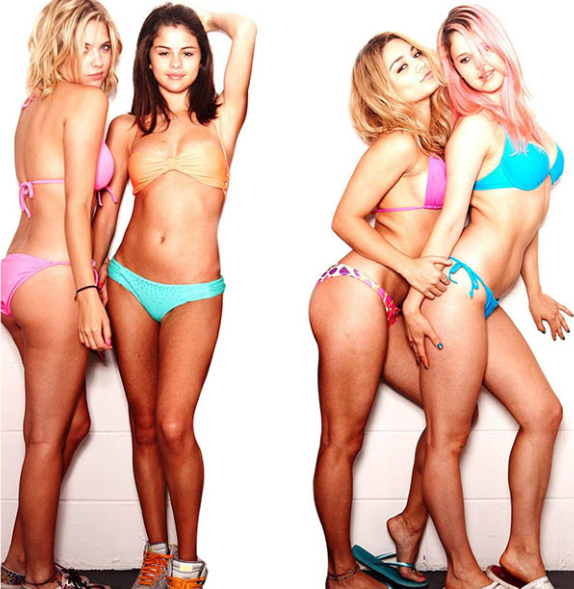 “Spring Breakers” is not a quality movie. It has questionable performances, clichéd dialogue, unlikeable characters, grotesque amounts of nudity and drug use, and overall it is perverted, obscene, and nothing but a cheap, dirty thrill.

The film comes to us by way of notorious director Harmony Korine, whose past films such as “Gummo,” “Julien Donkey-Boy,” and “Kids” (which he only wrote, not directed) have generated large amounts of controversy and polarized reviews due to their graphic content and surreal structure. And as many know, “Spring Breakers” sure is controversial. The film centers on four college girls who decide that they want to have an insane spring break in Florida to take a break from their relatively boring, but safe lives. This involves three of the girls robbing a fast food restaurant in order to get the money, leading to a vacation filled with drugs, sex, violence, and an ill-advised partnership with gangster/rapper Alien.

What makes this all so scandalous is that among the four leading ladies are Disney Channel stars Vanessa Hudgens and Selena Gomez. Gomez’s character is the moral center of the group, though, and the only one of the three girls who does not commit any violent acts or show any nudity. The same can’t be said for Hudgens, as she, Ashley Benson (of “Pretty Little Liars”), and Harmony Korine’s actual wife Rachel Korine round out the main cast with some much more provocative behavior. The four girls don’t set the world on fire with their acting, with theirs being the aforementioned questionable performances rife with cheesy dialogue and predictable character archetypes.

In any other movie, the failure of the main cast to really make an impact on the audience would be a huge detriment. However, Hugdens, Gomez, Benson, and Korine are saved by the emergence of the best character of the movie in the film’s second act: Alien, played by James Franco. Basing his character on that of Florida rapper Dangeruss, Franco turns in one hell of a performance, playing one of the seediest and creepiest personalities to grace the screen in a long time. What makes his turn notable, though, is how he is able to channel so much strangeness without giving any appearance of overacting. Alien feels like a real person, no matter how weird things get, and that in and of itself is a scary notion. The focus of the film shifts greatly toward him as the plot progresses, which isn’t a bad thing at all. At the end of the day, you’ll care far more about him and his battle with rival gangster Big Arch (amusingly played by Gucci Mane) than you do about the four girls.

So at this point, you may be asking, “Matt, if ‘Spring Breakers’ offers mediocre plotting, middle-of-the-road writing, a mostly vapid main cast, and only one good performance to speak of, why did you love it so much?” Let me answer that question with one word: spectacle.

Going in to this film expecting a typical movie-going experience is absolutely the wrong way to about it. “Spring Breakers” is a cheap thrill, through and through, and it doesn’t attempt to be anything else. The first two minutes alone feature literally hundreds of naked extras dancing on the beach and pouring alcohol all over each other to the tune of Skrillex’s “Scary Monsters and Nice Sprites.” And it’s all in slow motion. It’s gratuitous to the highest degree, but that’s the point. The film is quick, dirty, hedonistic fun, and it’s the perfect movie for when you’re in the mood for something trashy. You’ll see Hudgens smoking a bong, Benson snorting coke off someone’s boobs, Franco deep throating pistol silencers, and the three of them having a threesome in a hot tub. It’s that kind of movie.

Even though ‘Spring Breakers’ is unbelievably lowbrow, Korine’s direction is successful in creating an aesthetically unique film that actually leaves a mark. His typical surreal structure returns, with images and voice-overs almost floating across the screen in a disjointed, anti-illusory way. There aren’t so many “scenes” as there are events that flow into one another, jumping forward and backward in time in an almost dream-like way. The cinematography and mise-en-scéne also contribute to the dreamy atmosphere, with a consistent use of bold, neon colors and some truly striking images. It’s difficult to believe, but Korine is able to make this shameful, sybaritic jaunt actually quite beautiful. The film’s score, arranged by Skrillex, also adds to the spectacle, with tracks like “Scary Monsters,” A$AP ROCKY’s “Wild for the Night,” and Ellie Goulding’s “Lights” featured as some incredibly obvious but fitting choices.

“Spring Breakers” is not your average movie, and it is certainly not for everyone. Trying to compare it to any traditional Hollywood film will only result in disappointment. If you want to see it, throw away your shame and go see it as the dirty, perverted piece of trash that it loves to be. There’s nothing wrong with having some indecent fun at the theater every once in a while, and with Korine’s stylized directing, Franco’s fantastic performance, and—let’s be honest—the fun of seeing four hot girls, two of them Disney Channel stars, on a drug-fueled, sex-filled, life-threatening spring break vacation, it’s a damn good time. “Spring Breakers” is a cheap thrill, but it’s one of the most fully realized I’ve ever seen.