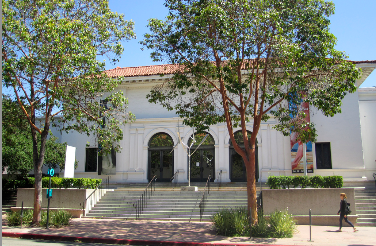 Local poet and writer David Starkey read from his latest book of poems, “Circus Maximus,” to an intimate gathering of fellow writers and art lovers on Thursday, April 4, at 6:30 p.m. in the Auditorium of the Santa Barbara Museum of Art, while images of paintings and architecture ethereally floated on the screen behind him.

Starkey, the former Santa Barbara poet-laureate from 2009 to 2010, is an integral member of the Santa Barbara poetry scene. A prolific writer, he has released eight books of poetry, as well as a widely used textbook on creative writing that is in its second edition. He also directs the creative writing program at Santa Barbara City College. He is well known for his 2010 project called “Poems for Santa Barbara,” for which he wrote 11 poems that focused on local people, places, things, or events in response to the suggestions he received from the people of Santa Barbara. The poems were then turned into videos which were presented on local Channel 21. Starkey said of the program, “I thought that was one of the better things I did.”

Despite the fact that he is best known for his poetry that reflects the colorful nature of Santa Barbara, the poetry that Starkey presented at his reading on Thursday came from his latest book of poetry, which wasn’t inspired by Santa Barbara. Rather, the poems were inspired by a recent trip he had taken to Rome with students from SBCC. However, the reverent connection to localism integral to his earlier work remains true for the poems of “Circus Maximus.” Each poem was grounded in the experiences, thoughts, and observations of the poet, whether they be of paintings, churches, or the people of the city itself.

“When I was in Rome I was writing a poem every day,” Starkey said, “so what ever happened to me that day, I would just write a poem about whatever I saw. I just sort of let it come in.”

The audience at the event really connected with Starkey’s poems and style, which he described as “giggling at the dark parts.” He attributes his poetic voice to that of his late friend and fellow poet, David Case, saying, “he’d get really serious and turn on a dime and do something comic, and then go back and do something serious.” One of the poems Starkey read was called “Votive,” a poem that directly addressed Case. It was a very emotional poem that really resonated with the audience, who was completely captivated.

Je Goolsby, a Santa Barbara resident as well as an artist and poet himself, said of Starkey and the poetry reading, “I thought it was a really good event, and I’d like to see more events like this.” What he liked best of the poems were that they were based on Starkey’s personal experiences.

Jen Kettler, another Santa Barbara resident, said of the reading overall, “Well, the poet was very expressive in reading his own work and being that I don’t see that many poets speaking, it was really a treat.” Kettler went on to say, “It’s great the way he approached [the Church in Rome], especially through the story of the nuns. The poem about the nuns, that they are going there and that they are laughing with joy and yet that when they go back to where they normally live and work it’s such a different life.” Kettler urged others to “travel, go to the art museums, experience to as much art as you possibly can.”

For all those interested, April is Santa Barbara Poetry Month, and there will be many similar events held around Santa Barbara. You can visit http://www.sbpoetry.net for more details.