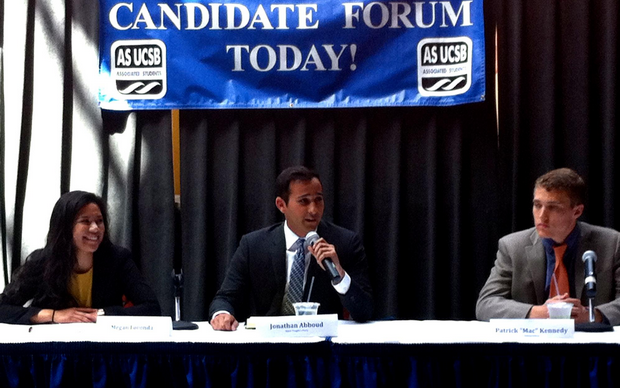 Campaigning for the 2013 Associated Students Election begins next week, but the season kicked off Thursday, April 11, at an open Presidential Candidate Forum hosted at the Hub on the University of California, Santa Barbara campus. The town hall question-and-answer forum demonstrated an animated exchange of campus policy between Megan Foronda, who is running with the Democratic Process Party; Jonathon Abboud, running with the Open People’s Party; and Patrick “Mac” Kennedy, running as an Independent. The topics ranged from budgetary finance, student-government transparency, and even “Deltopia.”

The party nominees focused on talking points that acknowledged their commitment to UCSB students.

“California higher education is not public,” said Megan Foronda. “We are paying as much as private universities—freshman tuition is 300 percent more than when we entered school.”

Foronda took a firm stance on educating UCSB students on the importance of community justice. Touting her record as co-chair on the Student Commission on Racial Equality, Foronda asserted that as AS President, she would facilitate student power and university dialogue.

Kennedy, underscoring his position as an Independent, unrestricted by the university’s party politics, also addressed tuition.

“The cost has shifted from the state onto the student’s backs,” said Kennedy. Walking across to the front of the table to speak to the crowd, Kennedy slammed the school’s party politics. Noting his experience lobbying state legislatures in Sacramento, he explained that a non-partisan recruiting process would essentially put power back into the hands of the student population.

Abboud affirmed his concern by offering plans on how to provide financial assistance to money-strapped students. He offered ideas ranging from an AS radio broadcast to an AS endowment to fund innovation and pay for scholarships. Abboud explained to the crowd that he kept important issues posted for the public on his Facebook page.

“[I have a] constant trend for seeking student approval for what I do,” said Abboud. “My door is always open.”

With the budget crisis still bearing down on the university, the candidates were obligated to address fiscal responsibility as key features of their platforms. Though each candidate pledged their dedication to UCSB students, they had little to say in the way of possible cuts.

“When we talk about financial responsibility, I am talking about getting money to the groups and organizations around on the campus, making sure they have the funds and resources they need,” said Foronda.

“We need to build a strong coalition of advocates for higher education, faculty, students and legislators. All must do their part,” said Abboud. Kennedy spoke on reforming the structure of AS and eradicating the spoils system of campus politics.

“The parties in AS are dominating the system,” said Kennedy. “Transparency is why I’m running; it’s a model for how I would act as President.”

Discussing Deltopia,  the candidates cited the environmental detriment of trash and glass left over by the street party, but Foronda was especially intolerant of apparent racial hate crimes. Other issues featured included lobbying efforts to Sacramento for education funding, honoraria, providing funds for low-income and community-involved students, and combating campus political indifference through outreach programs.

The campaigning will continue into the next couple weeks until the elections occurring online on GOLD from April 22-25.