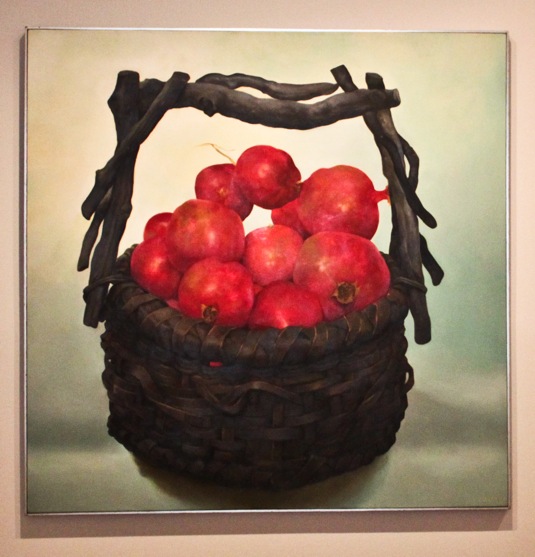 Prior to April 17, I’d never been to the University of California, Santa Barbara Museum of Art, Design, and Architecture. After my visit, I’m not sure if I’ll be returning—if so, only for the architecture. Although the concept of the one of the museum’s featured art exhibits, “Art on the Table,” initially posed the potential to be interesting and explorable, I walked out of the gallery feeling underwhelmed and mildly confused by it and more impressed by the exhibit titled “Outside In: The Architecture of Smith and Williams.”

When I first walked through the museum’s acid green doors, I proceeded into the first gallery reserved for “Art on the Table,” drawn in by the giant featured painting “The Japanese Basket.” After admiring its vivid colors, I indulged in brief staring contests with two other sketches, a display case full of bowl-shaped relics from five different civilizations, and four photographs (my favorite: a beautifully lit, candid photo of a working class family eating lunch). I turned the corner, appropriately hungry for more—and stumbled upon a completely different exhibit.

Wait, what? Only eight pieces? Where am I? After regaining my faculties and recognizing the exhibit as “The Arts of Precolumbian America,” I decided to continue on in hope of more food-related art. However, I found myself, instead, transported to a wonderland dedicated entirely to architecture. The name of the exhibit, “Outside In: The Architecture of Smith and Williams,” coaxed me inside.

In the museum’s two largest rooms, I found framed photographs of vintage gas stations, scale models of building designs under glass, and the centerpiece, a giant structure modeled after a Smith and Williams design displaying blueprints and magazine reviews of the architects’ work in the 1940s and ’50s. I sat in a retro egg chair and watched a slideshow of blueprints and building designs cycle on one of three small televisions, all the while feeling a little bad for the poor, homely art displays in the previous room.

Though both exhibits were certainly aesthetically pleasing and engaging, the extreme attention to detail present in the “Outside In: The Architecture of Smith and Williams” exhibit ultimately made me lose my appetite for “Art on the Table.” If both strike your fancy, though, the first exhibit runs until June 16 and the latter is open to the public until May 12.