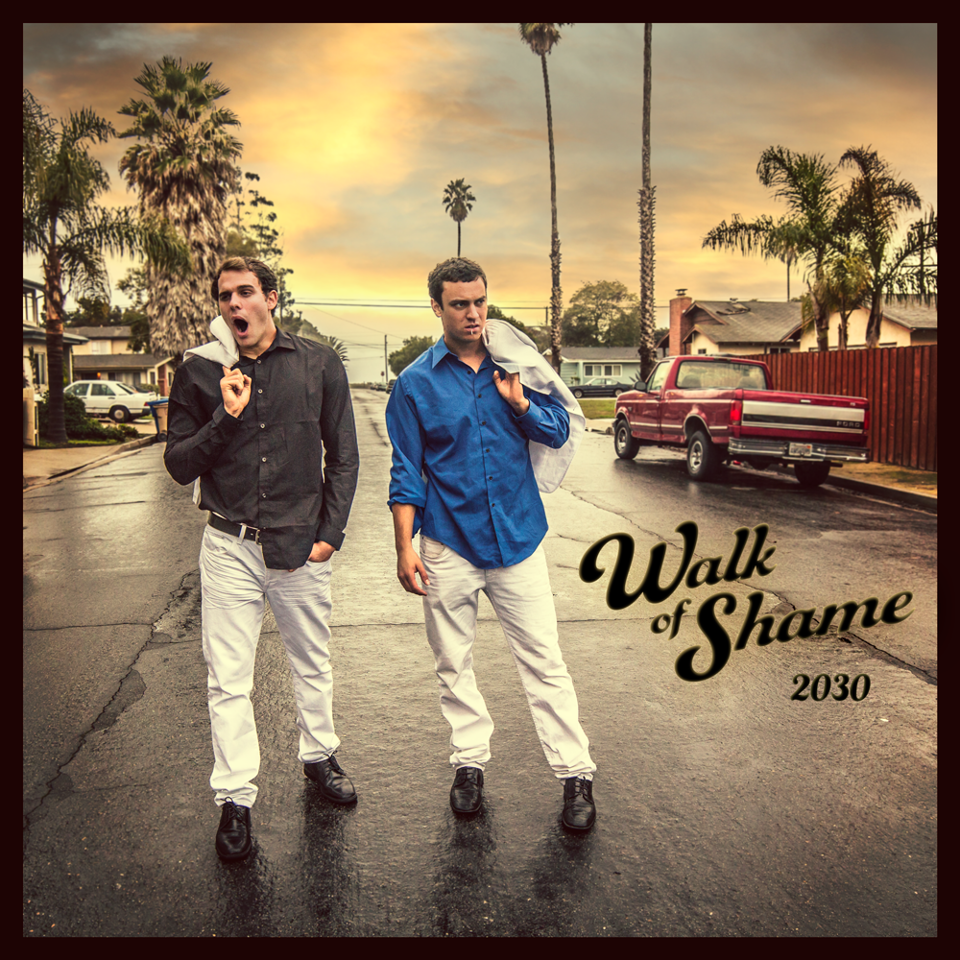 The video production group Thumbs Up Entertainment and musical duo 2030, which is comprised of University of California, Santa Barbara 2012 alumnus Brent Pella and Matt Pereira, depicts college life in a hilarious and fresh light with the recent release of their comedic music video “Walk of Shame,”which has rapidly garnered fame among college students at the UCSB. Produced by Pella, directed by Alex Michael Harris, and performed by Pella and Pereira (who made their mark with last year’s YouTube hit “Bike Path Love”), the team combined their talents to put a new spin on what it means to take a walk of shame.

Many college students have been there and done that at one point or another, or know someone who has. You know the drill—going home with someone for the night after partying together, often not knowing them at all previously, and waking up the next day in their bed, wearing different clothes (or less than you went out in), and taking that dreaded, long pilgrimage back home to your dismay and the delight of IV residents. Embarrassing, to say the least, but an entertaining thought nonetheless.

The humor of an otherwise humiliating situation is what Thumbs Up Entertainment drew upon for their video.

“A lot of people think the walk back home is shameful, so we put a really big comedy twist into the video,” said Pereira of the music video. “This kind of thing happens when you’re living the college lifestyle and you find yourself having to walk home all the way down the street.”

The video aims to show that the walk of shame does not have to be a mortifying occurrence; rather, it can be a source of outlandish amusement. After all, what better way to spend your time walking home than to interrupt a children’s basketball game, throw a stroller into the air, knock a newspaper out of someone’s hand, and push past a group of speed-walking elders?

“Throughout the whole video we’re smiling, happy, and in people’s faces all over the neighborhood,” said Pella. “We’re just going nuts; we’re more proud, overly excited, energetic, and not shameful.”

From the moment the music video starts to the choreographed dance piece at the end, the video captivates viewers for three minutes and 42 seconds with its catchy lyrics and entertaining dance moves.

“I find this music video very amusing, and so would most college students,” first-year psychology major Lucina Asatryan said. “Let’s face it, almost everyone takes the walk of shame [at some point].”

The collaborative efforts between the group go back long before the video’s inception. Pella and Harris are childhood friends who graduated from the same high school in Davis, Calif. Pella transferred to UCSB as a third-year to join the film and media studies program, and Harris transferred to Loyola Marymount University as a production major. Distance only kept them and their mutual interests apart for so long, though, and they eventually combined their innate talents to create Thumbs Up Entertainment. As their website, thumbsupent.com, states, they provide high-quality production aimed to entertain, inspire, and motivate viewers in a positive way.

Their previous accolades precede their current achievements. Among other outstanding accomplishments, Thumbs Up Entertainment won the SMASH award for Best Music Video, “Teach Me How To Scummy,” and the Best Editing award at LMU’s “Film Outside the Frame” film festival for the film “Escape Me.”

Awards aside, it is ultimately the relatable, cleverly written, and hilariously executed content of their videos that has given 2030 and Thumbs Up Entertainment a reputation in the college community and online.

“On a Sunday morning if you look outside, you might see somebody throwing their hands into the air and doing their walk of shame dance down the sidewalk,” said Pella.

2030 will be performing at Tonic nightclub in downtown Santa Barbara on Thursday, April 25. Doors open at 8 p.m.