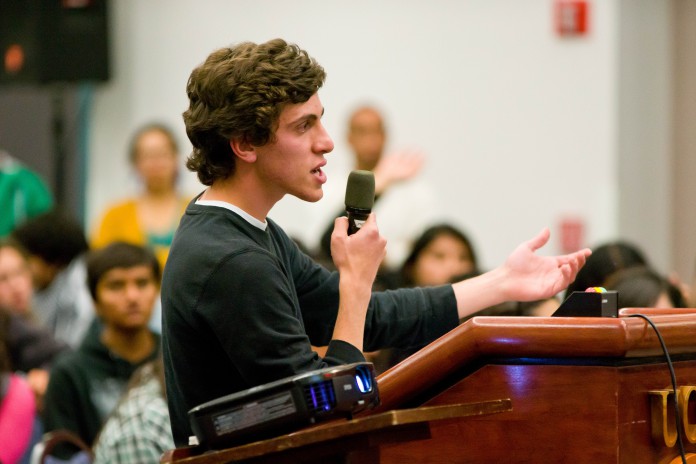 The Associated Students Senate meeting on Wednesday, April 3, consisted mainly of a public forum session in which students expressed varying opinions about a resolution that was on the table, entitled “A Resolution To Divest From Companies that Profit From Apartheid.”

The meeting, which was over 10 hours long, attracted over 200 students interested in hearing about the resolution. As a result of the large number of students in attendance, the meeting was moved from its usual location in the University Center to Corwin Pavilion.

According to the resolution, the companies they wish to divest from are helping fund Israel’s occupation of parts of Palestine.

The resolution, written by Senators Miya Sommers and Genesis Herrera, was often misinterpreted as a divestment from Israel as a whole, but many students clarified its true intent.

Despite this, marginalization of groups of students on campus became a main issue during the meeting.

“We are not a campus that marginalizes people,” said Rabbi Evan Goodman from Santa Barbara Hillel. “I’m concerned that this [resolution] will marginalize a whole segment of the student population.”

Goodman expressed his belief that no group of students is more or less important than others and that the divestment wouldn’t maintain this.

“The climate toward Jewish students is important but the climate toward Palestinian students of many different backgrounds is also important,” said Goodman. “[The resolution] won’t bring peace in the Middle East; it won’t be acted on by the Regents or the Chancellor, it will simply serve to marginalize.”

However, the opposing side believes this is already the case with a different part of the student population.

“Voting against the divestment is to take a partisan stance and choose some communities over others,” said Muslim Student Association President Omar Jishi.

The biggest issue people voiced at the meeting was that everyone believed it was best for the University to remain neutral regarding the conflict in the Middle East but the dissonance came from which way was the best way to do so.

“We’re asking you to divest completely from both sides of this issue, and that is what neutrality means,” said Noor Alhuda. “Everyone has clarified that this is not against Jewish students or Israeli students.”

During the meeting, Senator Ben Green read from the Associated Students Bill of Rights, which stated: “ASUCSB shall not pass any Bill or Resolution that discriminates against students nor support any entity that discriminates students.”

Third-year Katlen Abuata spoke against this statement, saying this resolution will not discriminate students.

“Our purpose here is to divest from corporations which we know are acting wrongfully,” said Abuata.

UCSB Professor of Communication Walid Afifi also spoke in favor of the resolution.

“The companies which UCSB is invested in…are supporting the only free country in the Middle East,” said Speyer. “This resolution has already created a divide before even being voted on.”

Third-year political science major Sawyeh Maghsoodloo spoke against both the occupation of Palestinian land and against the divestment. She referenced the people opposing the resolution in view of it being against both University law and United States Law.

“Universities are the place where all big movements have started,” said Maghsoodloo.

Finally, after hearing many opposing opinions on the issue, the authors of the resolution spoke.

Sommers motioned to table the resolution for one week so the senators could learn more about the issues and make fully informed decisions on the resolution, and Herrera agreed.

The Senate voted 11-11-1 to table the resolution, and a tie-breaker from Internal Vice President Mayra Segovia allowed it to be tabled. The Senate will discuss and vote on the resolution as well as a few others that were not given any time on Wednesday, April 10, at 6:30 p.m. in Corwin Pavilion.