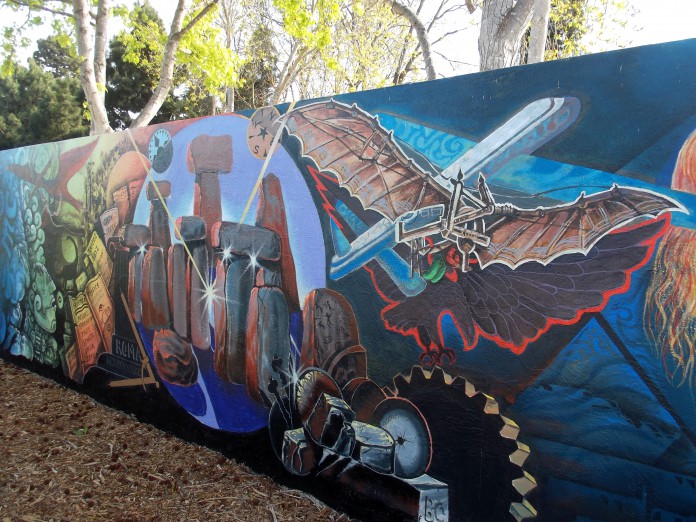 A new mural was unveiled at the Eastside Library in downtown Santa Barbara on April 3 to celebrate reading, education, and the futures of the next generation. The mural was painted and planned by artist and University of California, Santa Barbara graduate Manuel Unzueta and local high school artists.

Spread across a 130 foot expanse of exterior library wall, images of individuals throughout history, spanning in topic from the Curies to Mother Theresa, are painted in striking colors and detail. Each piece follows a timeline throughout history, with each side representing a different section of intellectual pursuit.

The right wall, which represents human-centered studies like history and English, begins with a young student reading a book, and then proceeds towards the center with images of ancient Egyptians, saints, and supporters of human rights and equality. The left side focuses on math and science, and, after beginning with the painting of a young girl on her computer, explores the concepts of DNA, flight, engineering, and biology.

Each image flows seamlessly with the next in a grand expanse local politician and Santa Barbara City Council member Cathy Murillo hopes will draw young students to the library.

“This mural promotes education, culture, reading, and I have not given up on books,” said Murillo. “Some people think they’re kind of old fashioned, but this group is saying, ‘go to the library, start your adventure, promote your education, and make your dreams come true.’”

The project has already attracted the attention of the community and gotten the local community involved in its creation and preservation. Artist Manuel Unzueta said that children from the nearby schools would ask him and the others about the project and offer their input and suggestions. Women who walk their dogs past the library have also offered to walk their dogs at night to ensure that no one tags the new artwork.

“This mural, it was intended for a library and to beautify the east side around the east side community center,” said Unzueta. “…I thought that art, patience, day to day, month to month, we could work with the kids, the parents, with the community to convince them that we can live together in peace.”

Alexandra Real, a senior at Santa Barbara High School and a contributor to some of the other murals throughout Santa Barbara, said she hopes the mural will join together members of the community and help the next generation choose to pursue higher education.

“This has been just such a great experience,” said Real. “Working with the Santa Barbara Arts Alliance has helped me so much for me and the community.”

Real said one of the best parts of participating in murals through Santa Barbara was the potential effect the pieces could have on the community.

“I’ve been able to use my hobby as making art and by helping my community…see and have beautiful murals instead of having tagged walls,” said Real. “Instead they can come here and see the beauty of this art…and maybe they, in the future, become interested, and they too help in the art and helping the community, which I found as a passion for me.”

According to Unzueta, promoting a sense of community as well as encouraging younger kids to attend college was a large part of the mural’s creation and its design.

“When I’m painting and I see a little kid from Franklin school and he questions me and he challenges me, to me that’s the answer. Or a parent or a community person, [who asks], ‘What are you doing? Why are you doing this?’ Then we can dialogue and we can get some kids out of gangs. We can convince some parents that they do not understand about art…They say wow, this is important.”

The mural stands as a testament to the unification of art and education, demonstrating the idea that intelligence without color leaves nothing but tagged, otherwise white walls.