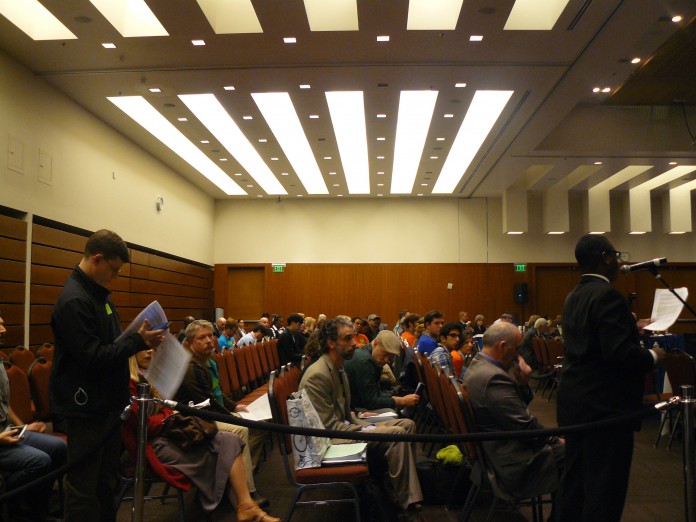 (Above: Jonathan Lee addresses Regents during Public Comment. Left: Public Commenters await their turn at the microphone to address Regents)

Day two of the University of California Regents Meeting began with public voices supporting and disagreeing with issues ranging from fossil fuel divestment to the UC SHIP fee increase.

Five UC Berkeley graduate students told stories of both undergraduate and graduate students from different UC campuses who have thousands of dollars in medical bills as a result of reaching the caps on their UC SHIP plans.

Ben Keller read a story of a UC Santa Cruz graduate student with a severe nerve-related autoimmune disease. A friend of the student wrote the story.

“[The student] received a letter from UC saying she is now out of coverage,” Green read. “She has no other options for coverage because being a graduate student is not very lucrative. She is in a lot of pain and losing mobility as I write.”

Charlie Eaton told the story of a UC Berkeley student whose daughter was born with a bacterial infection, and has bills from keeping her in the hospital extra days after the $25,000 cap for newborn care was reached.

“Despite months of information requests, we haven’t been told how many students have exceeded these caps, and how much it would cost if we eliminated it, which would put us in line with the standards of Obamacare,” said Green. “We’re glad that the UCOP has indicated it will be eliminating the caps on lifetime care and on prescription drug coverage, but we need to address these caps too.”

Eric Green, a UC Santa Cruz graduate student, summed up a lot of students’ feelings over different fees and tuition increases in the 2013-2014 year.

Two UCSF Medical Center Employees, Tim Thrush and MRI technologist Randy Johnson, spoke about a decrease in patient care that resulted from cutting staff but increasing the space of the medical center.

The Public Comment Session ended with members of Fossil Free UC voicing their endorsement of the UC’s divesting from fossil fuels. Student governments from three UCs—UC Berkeley, UC Santa Barbara, and UC San Diego—have already pledged to divest from fossil fuels. Now, students are trying to get the Regents to include it in their next meeting in May.

“We divested to affirm that our future will not be secured with continued investment in fossil fuels,” said UC Berkeley student senator Nolan Pack. “Every penny that we invest in fossil fuels further empowers the most powerful industry on Earth to further entrench us in an outdated energy infrastructure.”

Students encourage the Regents to divest from fossil fuels for environmental and social reasons, in addition to aiding in the UC’s goal of zero waste by 2020.

“The UC can never truly be zero waste if we are investing in an inherently wasteful and destructive industry,” said UC Davis third-year Emili Said, a member of the California Student Sustainability Coalition. “Investing in this industry holds us from our own goals. The fact that the negative environmental impact of the fossil fuel industry disproportionally affects people of color makes this industry a tool of systematic oppression. I believe UC should divest from this industry so that we can be a pillar of social and environmental justice and academia.”

After the public comment session, Fossil Free UC students protested outside the building, holding signs and chanting, “We are unstoppable, another world is possible.”