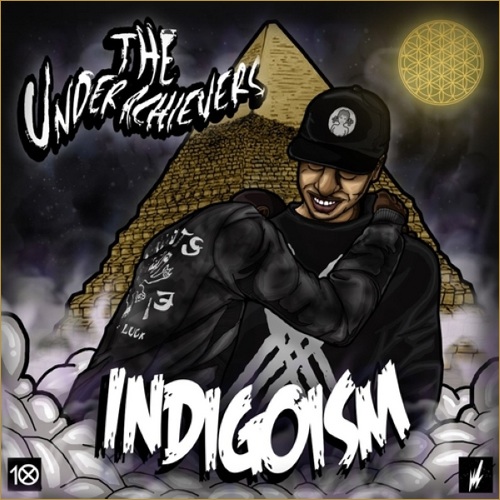 The Underachievers’ debut album proves once again that New York is among the best breeding grounds for innovative rappers. Lately, the Big Apple’s scene has undergone a revival centered around The Beast Coast Movement, which is a movement of various rappers and collectives including, amongst others: A$AP Mob, Pro Era, Flatbush Zombies, and of course, The Underachievers. Each group brings something a little different, but the movement is centered around celebrating the East Coast rap game. “Indigoism” is The Underachievers’ first mixtape release, and while it shows room for improvement and maturation, the album is a notably good listen.

From the very outset the duo’s eclectic style is clear; the influence of eastern philosophy and religion is undeniable, as is the mix of 90s style and modern production values. While this combination may seem rather strange, it works extremely well for The Underachievers, adding to the mixtape’s amorphous nature. The rappers never seem to commit to one style, choosing instead to create a very dynamic collage of their various influences. The backbone of the release is definetly thematics, rather than production style or flow. Themes like drugs, psychedelia, spiritual elevation, violence, New York life, and good old-fashioned rapper bravado connect and solidify the album.

That being said, the duo is more flow focused than a lot of other groups in The Beast Coast Movement, but the production value doesn’t suffer for it. The group is signed to Flying Lotus’ Brainfeeder label and clear connections can be drawn between his recent Captain Murphy release “Duality” and “Indigoism,” especially in reference to the production of the latter.

Certain songs on “Indigoism” stand out above the others, highlighting the group’s many-sided influences and style. The opening song of the album, “Philanthropist,” undulates between chorus and the various flows of Issa Dash and Ak. While it may not be the strongest song, it definitely sets the feel of the mixtape, proving the strengths of both rappers and demonstrating the blended nature of the release. “Indigoism” continually pushes in different directions, at times integrating rock, reggae, and even blues elements, and then pulls back and grounds itself in 90s style rap. “Herb Shuttles” showcase hi-hats and 808s coupled with doubled up, sped up and slowed down flows to create one of the mixtape’s strongest and most defining songs. Other songs like “6th Sense” and “The Madhi” reiterate the aforementioned melodic backbone to the album. The mixtape as a whole highlights the conscious lyrical strength of the duo. Lines like “Men slay every day, for the means of justice, trust it” from “Herb Shuttles” stick with the listener long after the song and the mixtape end.

The whole mixtape is less than an hour long and feels at times overwhelming in the sheer amount of lyrics the duo raps. They are unwilling to sacrifice depth either—each line drives their points home, which is why it’s perhaps best to listen to the album bit by bit, focusing on each song. The main negatives to the release are perhaps an overuse of certain lines and themes, like “third eye sh*t.”

Overall, the mixtape is incredible for a first release, showcasing a unique group with great raw talent and lots of promise. Expect more great things from this young duo in the future!

Photo courtesy of The Underachievers