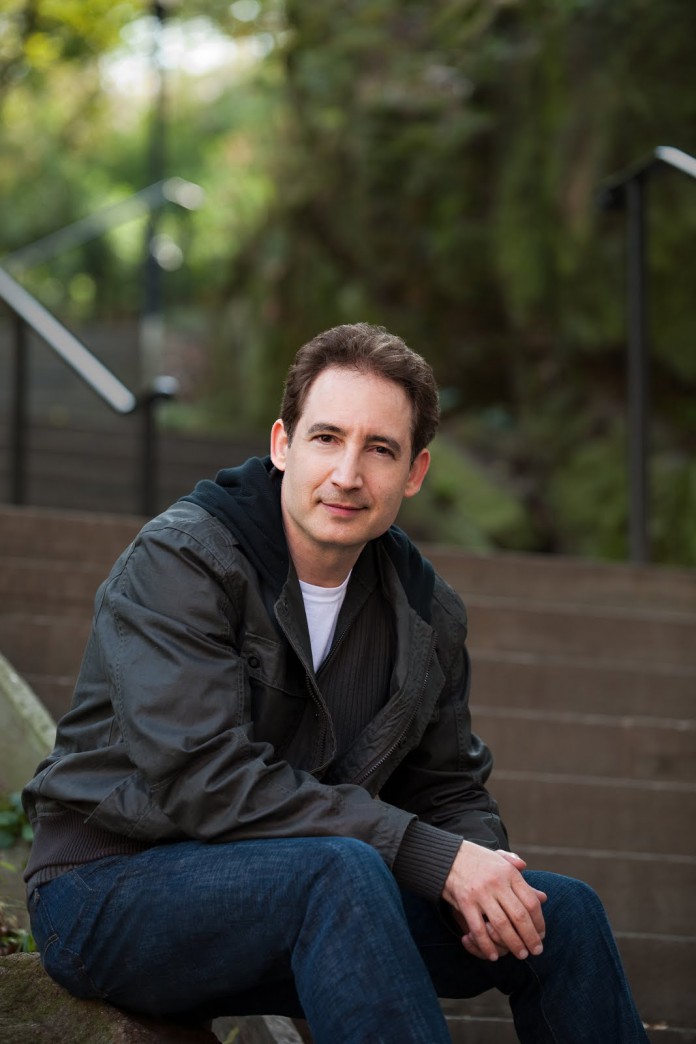 “I’m glad to see you were all required to read Newton’s ‘Principia’ before the lecture tonight,” joked Brian Greene, professor of physics at Columbia and author of several books on string and multiverse theory, among other fields of theoretical physics. He offered, in fact, a lecture that would be palatable even to those lacking the benefit of a background in classical mechanics. Through a combination of real world examples and a few helpful animations, Greene managed to sufficiently explain the concepts of physics without the math that most would find daunting. His talk was featured at the University of California, Santa Barbara’s Campbell Hall on Feb. 25 through Arts & Lectures.

Greene moved through a brief introduction into the world of a Newtonian understanding of space and gravity to the advances that brought theoretical physics to the point it is at today. The work of developing string theory (or any other single unified “theory of everything”) was an undertaking that took many years and a number of scientists—beginning with Albert Einstein’s theory of relativity. The theory of relativity introduced a new conceptualization of gravity, or at least an idea of how gravity works. One of Einstein’s ideas that challenged the traditional notion of gravity was that spacetime was curved. Greene offered that objects moving through the galaxy can be imagined as marbles moving along a “sheet” of reality, causing depressions in that “sheet” as they travelled.

The work of Edwin Hubble provided another key piece of the puzzle, Greene continued; he said that the size of the universe was not static, but constantly expanding. The expanding force is called dark energy—a kind of gravity that “pushes” objects apart rather than pulling them in. H­owever, the amount of dark energy in the universe was measured at a shockingly small number. Greene, a supporter of the theory of multiverse, explained this as a result of multiple universes existing beside our own.

This idea of the existence of multiple universes, called multiverse theory, postulates that the ‘big bang’ that created our universe was simply one of many. This chain of explosive expansions lead to a potentially infinite number of universes besides our own—each, Greene asserted, with their own amount of dark energy causing varying rates of expansion. These universes, said Greene, could range (in terms of physical properties, etc.) from unrecognizable to nearly identical to our own.

Greene concluded his discussion with an explanation of string theory. His idea behind string theory postulates that rather than the protons, neutrons, or even quarks being the smallest division possible to make into a particle, the fundamental building block of all matter is a very small, thin filament called a string. These strings exist in multi-dimensional space; specifically, in the case of superstring theory, their shape is determined in ten dimensions (as well as an eleventh dimension of time, similar to the classical fourth dimension of time).

The idea is that these dimensions exist in a sort of curled or folded state, beyond what is visible to the naked eye in our seemingly three dimensional world. The vibrations of each of these strings determines the kind of particle they present themselves as. To put it in layman’s terms, Greene compared it to the idea of different vibrations of strings on a cello producing different sounds.

“Music is at the heart of all matter, in some metaphorical sense,” said Greene, an elegant summation of the beauty of string theory.

Tying back to the idea of the multiverse, he further added that the definitive “shape” of each string as it exists over ten dimensions, called a Calabi-Yau manifold, would be likely different for each universe. Scientists have found a huge number of these potential Calabi-Yau manifolds (numbering something to the tune of 10500), which seems to be an easy fit with the idea of a massive number of other universes.

Though a simplification of the ideas of string theory and quantum physics, Greene’s explanations of the concepts served to satisfy the curiosities of the packed Campbell Hall audience.

Following the lecture, Greene answered a number of questions clarifying the night’s speech, adding that the possibility of the Higgs-Boson spelling the “end of the world” (following the findings of a Higgs-like particle by the large hadron collider in, it was postulated that the mass of the Higgs might be such that it could cause the universe to collapse into a lower energy state) was “probably not something we should worry about. At least not yet.”