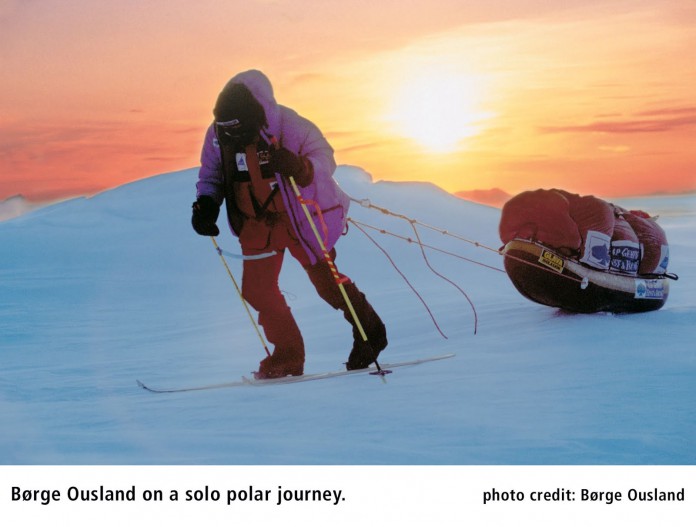 Norwegian polar explorer Borge Ousland shared the thrill and chill of his life experiences and escapades with an enthusiastic audience at the University of California, Santa Barbara’s Campbell Hall on March 3. Ousland has contributed to the documentation of the extreme nature in high latitudes over 25 years, and has embarked on 18 trips to the North Pole and six to the South Pole. Through his lecture titled “Adventures in Polar Exploration,” which was put on by UCSB’s Arts & Lectures, Ousland narrated the story of his life, his motivations, and how he managed to continue his journey under the most difficult conditions.

“When I was a child, I already liked adventures and I read the book of Fridtjof Nansen, who inspired me,” Ousland said. After a period as member of the Norway’s Marinejeger—the equivalent to the U.S. Navy Seals—Ousland decided to follow the steps of Hjalmar Johansen and Nansen, who attempted to reach the geographical North Pole in 1893-1896. Using an impressive series of photographs and videos, Ousland showed the most dramatic moments as well as the wonderful nature surrounding his expeditions that stemmed from his decision to follow in Nansen’s footsteps.

Throughout his life as explorer, Ousland has witnessed the challenge that have resulted from climate change. In a 2007 expedition, his team decided to change the equipment and to take kayaks due to melting ice in extended areas of the North Pole.

“Conditions become dangerous in a different way. One time melting ice surprised us,” Ousland said. “We were sleeping when ice surface started to crack under our tent, and fortunately we could handle the situation.”

Ousland also noted a memorable moment when he and his team reached the Eva Liv island (the north-easternmost island in the Russian Arctic) in 2007. It was the first time someone was there after the expedition of Johansen and Nansen.

“In 1895, they did not have any food and they hunted polar bears not to die. When we reached there, we found the bears’ bones as evidence of that trip,” Ousland said. While there, Ousland described the physical and mental struggles that he endured when the boat that was supposed to collect them was delayed two weeks.

“Without any food, we were already feeling the hunger when we saw a boat and a helicopter approaching: they were tourists coming! We could have a shower after three months. It was heaven,” said Ousland.

Ousland also touched up his solo trip to the North Pole in 1994, which marked the first time anyone had gone there alone.

“I stop, and I start to look around. Then I realize that I am actually walking through the Arctic and I see how amazing it is,” Ousland recalled. He confessed that he cannot prepare mentally his trips, and was discouraged at times while he was alone. “However, you have to try to get the big perspective of it and think: I am in good shape and I have enough food. These thoughts are not rational. This is all about feelings, and feelings will pass and go over.”

To close the evening, Ousland explained the deep motivations that move him to lead these risky expeditions. “Why? Why fight the cold, especially when you wake up in the morning after a wonderful dream and you find yourself in the middle of the wild? Because I like it and I relate to those surroundings in a complete new way, and to share this beautiful world with the people, with you guys.”