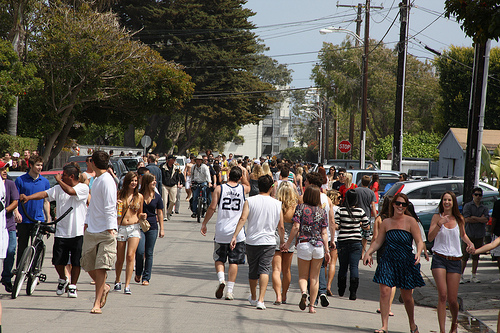 The BBQ, which is designed to provide students with a safe respite from the infamous day party, will feature traditional barbecue cuisine in addition to snow cones, music, and portable restrooms. It will take place on Saturday, April 6, from approximately 1 p.m. to 4 p.m. in Little Acorn Park, which lays steps away from Del Playa at the intersection of Sabado Tarde and Embarcadero Road.

“I want to create a space for students to gather themselves after drinking, grab a bite to eat, and hydrate themselves,” explained Siordia.

Siordia compared the event to the “hydration station” manned by the EVPLA office over this past Halloween weekend, at which volunteers provided water and porta-potties for revelers in need of refreshment. The EVPLA office has never before administered such an event during Deltopia, but Siordia is optimistic.

As much as the barbecue is designed to enhance student fun and safety, a corollary goal is to make the scene more convenient for law enforcement intervention.

“If people do go to it,” speculated Siordia, “it’ll thin out the crowds on DP, which’ll make it easier for law enforcement to get in if need be.”

In past years, the infamous Floatopia weekend brought students to Isla Vista beaches in droves bearing beers, boats, and bikinis, but the event was relatively small and primarily local. In 2009, many credited the creation of an official Floatopia Facebook page with drawing more than 12,000 revelers down the beach-access stairs, far more than the 4,000 participants estimated in 2008 and the 300 Floatopians estimated in 2007.

Ever since the 2009 event ended in a drunken slew of hospitalizations, arrests, and citations, leaving Isla Vista’s beaches strewn with trash, the Santa Barbara County Community Services Department has closed down the beaches on Floatopia weekend each April. Deltopia, which sprung up in 2010 as a reaction against the beach closure, comprises a host of day parties and DJ acts as students walk the streets of Isla Vista.

This year’s Deltopia is marked by a myriad of Facebook events, including one which already boasts nearly 9,000 attendees a month before the big day and purports that the day will be sponsored by electronic music websites Run the Trap, Techibeats, and Emazing.

The Isla Vista Foot Patrol will patrol the streets, and in general Deltopia 2013 looks to uphold and expand upon the precedent set in the previous three years.