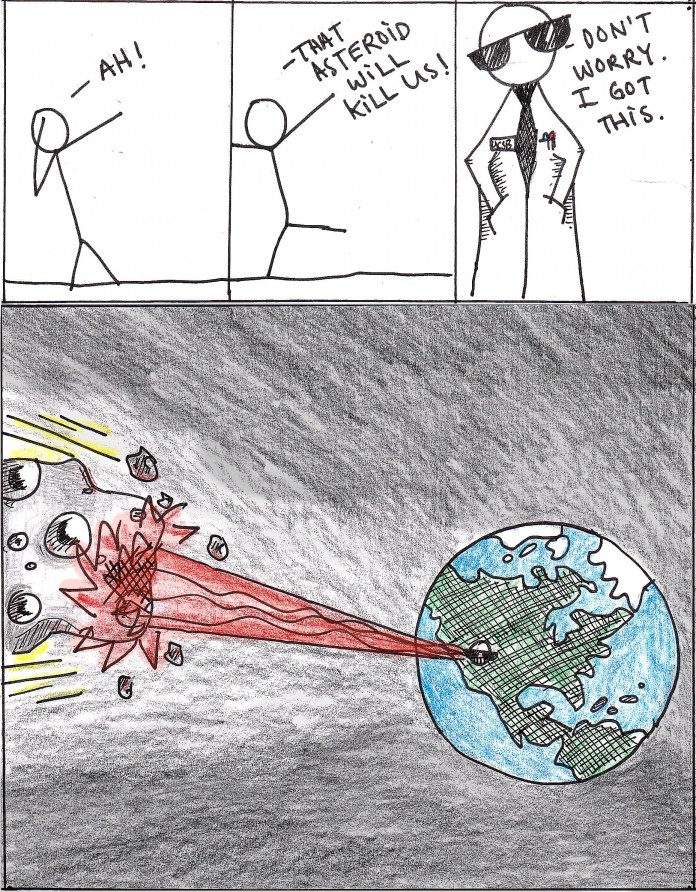 On Feb. 14, 2013, the day before the Russian Chelyabinsk asteroid impact, University of California, Santa Barbara professor Philip M. Lubin and California Polytechnic State University, San Luis Obispo professor Gary Hughes unveiled a press release detailing a project dubbed DE-STAR, or “Directed Energy Solar Targeting of Asteroids and exploRation.” The concept would manifest itself as a construct capable of neutralizing asteroids that pose the danger of impact with our planet before they have a chance.

This isn’t “Star Wars,” kids. It is a highly complex yet reasonable idea that could lead to even more technological developments than just asteroid defense.

As detailed in the press release, “DE-STAR is designed to harness some of the power of the sun and convert it into a massive phased array of laser beams that can destroy, or evaporate asteroids posing a potential threat to Earth. It is equally capable of changing an asteroid’s orbit—deflecting it away from Earth, or into the Sun.” Even though this may sound hypothetical, it is, in fact, based on practical and conservative estimates regarding the state of technology in the coming years.

“We advocate a phased approach starting with smaller units and not building the full system today,” says Lubin. “It’s feasible to do in the longer term. Technologically, we can now convert light into electricity very efficiently now. We’re approaching 50 percent efficiency now and we’ll probably achieve 70 percent efficiency over the next 10 to 20 years.”

These are rather realistic estimates; as reported by Bill Scanlon of Phys.Org, the III-V Multijunction Photovoltaics Group of the U.S. Department of Energy’s National Renewable Energy Laboratory has recorded efficiency of multi-junction solar cells at 43.5 percent and 44 percent within the last two months. In 2000, the efficiency of these cells clocked in at only slightly over 32 percent (keep in mind, these are high-end solar cells that are used for tasks like powering the International Space Station and would be utilized in DE-STAR; consumer solar cells are reaching efficiencies of close to 20 percent at this point). There has been steady progress since this time, so assuming 70 percent efficiency within the next two decades appears to be absolutely reasonable.

So how does turning light into electricity fit into DE-STAR’s design?

“The other piece of the puzzle that is rapidly changing is turning electricity into light…and the ability to turn electricity into laser light using a diode or fiber amplified  laser has changed dramatically,” Lubin explains. “There are high-powered, high-efficiency lasers that can be phase-locked…and that is the same technology that can be applicable to a high-powered phased array of lasers that could begin the evaporation of asteroids.”

In more basic terms, by converting solar energy into electricity, that electricity can then be transformed back into light that could be focused as a laser on a specific target—in this case, an asteroid. The efficiency for converting electricity back into light has, in fact, been increasing considerably. Optics.org reports that German company Jenoptik has created arrays of emitters that can reach efficiencies of 69 percent. The DE-STAR groups assumed 70 percent conversion efficiency from electricity into laser light over the next decade thus seems rather conservative.

With technology currently moving in the right direction, another issue becomes relevant: how a concept like DE-STAR could actually be mechanically constructed. According to the press release, “DE-STAR 2—at 100 meters in diameter, about the size of the International Space Station—could start nudging small asteroids that pass relatively close by to Earth out of threatening orbits…But DE-STAR 4—at 10 kilometers in diameter, about 100 times the size of the ISS—could deliver 1.4 megatons of energy per day to its target…obliterating an asteroid 500 meters across in one year or moving even larger ones well away from us.” That sounds almost unimaginable at this point, but Professor Lubin remains optimistic. “It’s a modular system, so we can begin with the smaller models and work out the bugs with each iteration,” he says. “It’s a large project, but I don’t think it’s insane on the scale of say, 50 years from now. It’s quite conceivable that we’ll learn how to build these large structures.”

Asteroid impact has been responsible for some of the greatest extinction events in the history of the planet; however, the team working on DE-STAR realizes that these impacts are few and far between. As a result, they have begun thinking of other uses for the project, including photon propulsion for spacecraft.

“With an ultra high-powered laser the light itself becomes a ‘photon rail gun’ that can be used as a form of propulsion,” says Lubin. “You also don’t have to carry it with you; you basically just shine it at a large reflector on the spacecraft, an extreme solar sail.” A DE-STAR 4 system can be used to accelerate interplanetary travel with a 1000 kg craft reaching Mars in about two weeks or accelerate a craft to the outer solar system at about 3 percent of the speed of light. If we can master such systems in our future we might imagine someday building a DE-STAR 6 that is capable of propelling a 10-ton spacecraft to near the speed of light. Science fiction fans rejoice, because DE-STAR may in fact be the first step toward the feasibility of interstellar travel.

Professor Lubin and Professor Hughes have taken an immense task—defending the planet from asteroids—and managed to create an intricate system of doing so that could quite possibly come to life within the century. While the planet is not on the cusp of an extinction-sized impact quite yet, there is nothing wrong with looking ahead. And thanks to the DE-STAR team, Earth is approaching complete safety from total devastation. Perhaps it will even place us on the path to sending probes to nearby stars.