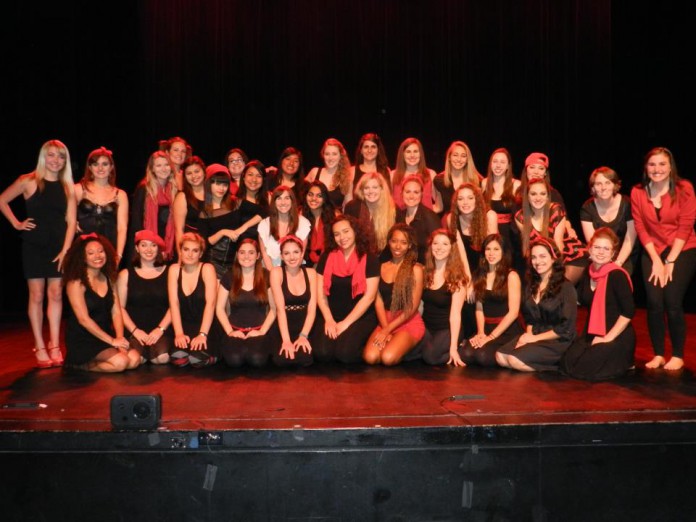 After much promotion by a shouting vagina, UCSB’s Women’s Ensemble Theatre Troupe presented The Vagina Monologues from Feb. 1 to 3 in solidarity with the V-Day movement to promote empowerment for women. The episodic play was first written by Eve Ensler and premiered in 1996. Ensler’s original purpose in writing the play was simply to “celebrate the vagina,” but her play sparked a movement called “V-Day,” which hopes to end violence against women and girls worldwide. Through V-Day, The Women’s Ensemble Theatre Troupe brought The Vagina Monologues to UCSB—not just for women, but for everyone.

In three performances, the troupe told the stories of the many women Ensler interviewed. From one woman’s proud reclamation of the word “cunt” to another’s recollection of rape at the hands of soldiers, the monologues were nothing short of moving and inspiring, eliciting laughter, gasps, and even tears from the audience.

Emily Parsons, performer of “Vulva Club,” found the audience’s reactions to be empowering. “I feel like we’ve really progressed as a society by being able to talk about this,” she said, also calling the performance “a step in the right direction.” Chelsea Lewis, performer in the introduction, echoed a similar sentiment. She hopes the show will inspire her younger sisters in the audience and teach them to be proud to have vaginas.

Many audience and cast members found that they could easily relate to the monologues. Anisha Ahuja, a second-year political science major, loved the play and found it inspiring.

“I noticed a lot of inclusivity of different womyn of color… it was not only relatable but also incredibly important for education about what [womyn] go through,” said Ahuja.

I found myself relating to a lot of the monologues presented, too. My favorite was “My Short Skirt,” performed by Jore Aaron, which made a powerful statement about owning your own body and the fact that what someone chooses to wear does not give anyone else an invitation to touch them. As a feminist, I found this statement and the emphasis on personal choice to be very empowering indeed. A close runner-up would be “My Angry Vagina,” performed by Jake Picker, which was a furious, hilarious, and much-needed rant about the irritations that people with vaginas face, such as tampons, douches, and cold, metallic OB-GYN tools.

While the performance itself lasted only a weekend, the group had been working hard since November 2012. Mary Mehrkens, director of the show and performer of “The Woman Who Liked To Make Vaginas Happy,” said that her favorite part of being in The Vagina Monologues was both the cast and the. She said that to her it was not just a play, but also a symbol of women rising to seek empowerment.

In the spirit of V-Day, Feb. 14, 90 percent of the ticket proceeds went to the Santa Barbara Rape Crisis Center and 10 percent went to One Billion Rising, Ensler’s campaign.