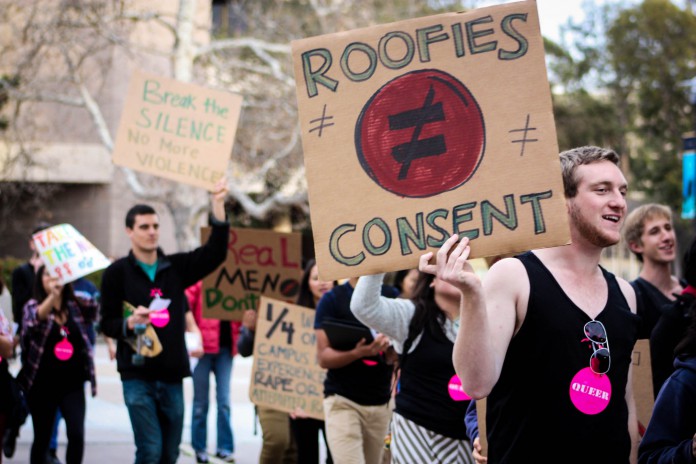 University of California, Santa Barbara’s Queer Student Union and Take Back the Night joined forces on Feb. 1 to march through campus and Isla Vista, hoping to bring attention to homophobia and sexual violence occurring in the local community.

Over 30 students from varying sexual orientations united together outside of Cheadle Hall to put on Queer Bomb t-shirts and grab signs stating, “Consent isn’t just an answer. It’s an attitude,” and “My queer identity is not an excuse to rape me.” The march proceeded through campus, onto Pardall Road and Del Playa Drive, eventually cumulating at Manzanita Residence Halls. Participants carried their signs and chanted in unison, singing, “No more violence. No more hate. I will choose my own mate,” and “Hey hey, ho ho, homophobia’s got to go.”

Anisha Ahuja, a second-year political science major, participated in the march and said the event brought attention to issues the Isla Vista and UCSB community ignores.

“We need to raise awareness about the issues that are going on that are targeting the female community and the queer community on our campus,” said Ahuja. “There’s a lot of really bad rape culture in this area and no one’s really doing anything about it, and we can’t remain silent anymore.”

Ahuja said the ultimate goal of the event for her, QSU, and Take Back the Night, is to raise awareness.

“We hope that people start realizing that talking about this is not taboo and it shouldn’t be something that we joke about anymore,” said Ahuja, “and we’re hoping that if we yell it at peoples’ faces they’ll come by and listen to us.”

For others, the event was a chance to take a stand for LGBTQIA and women’s rights. Miya Sommers, a third-year global studies major and Associated Students senator, said it was important for those in positions of power on campus to support these communities.

“I believe it’s essentially important for us as student representatives and student leaders to take a stand against injustice going on in our community,” said Sommers.

Sommers, who is not a member of QSU, said the behavior of those they passed in Isla Vista further proved that the culture in IV is one not fully accepting of the queer community.

“As we were walking here, a group of guys were like ‘fuck these faggots,’” said Sommers. “This is the 21st fucking century. How can you say these things? This is such a pressing need and an urgent issue, and it’s ridiculous that we have to be out here fighting for our human rights, but I think that it’s important and that we need to take a stand in this community. Homophobia’s got to go.”

RJ Thomsen, Queer Commission co-chair and leader of the march, urged the participants to remember that collective action is more powerful than prejudice and offered to walk anyone home who did not feel safe, insisting it is a real issue in the community.

“We decided we had to come and take back the night,” said Thomsen about the rally. “We had to come and reclaim our space because IV is where a lot of our homes are. And it’s just walking to and from campus where people will get ‘fag,’ homophobic slurs like that slung at them. I’ve have people call me it.”

Thomsen said he hopes the collaboration between the QSU and Take Back the Night begins the process of educating groups not directly associated with the queer community.

“I think one of the faults of our community has been we haven’t reached out enough so we’re definitely trying to reach out more,” Thomsen said. “That’s also why we wanted to collaborate with Take Back the Night, because we wanted to get other groups who might not always be involved, who are generally allies but maybe not as active allies. Take Back the Night has been really active allies with us, so we thought it would be a good first kind of collaboration to get out into more communities besides just the queer community because we don’t want to be preaching to the choir with our message of education.”